How much is a Trip to Bora Bora?

Webcam of Tahiti and Moorea

Agenda of the year

Communication in the islands of Tahiti

Where are the islands of Tahiti? 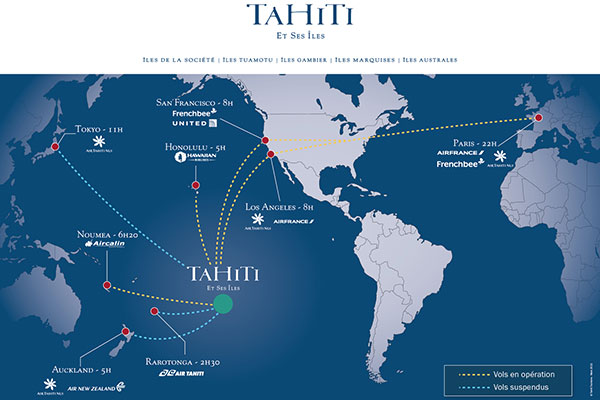 Located right in the middle of the Pacific Ocean, French Polynesia spreads over 2.4 million miles. As big as Europe, this maritime territory turns out to be 6 089 mi away from the United States.
With its 118 islands scattered about the ocean, the islands of Tahiti offer a great range of possibilities: honeymoon vacation, romantic travel, adventure tour, sport trip, cultural immersion, aquatic exploration, nautical odyssey and much more…

Even though each island bathes in the same crystal-clear waters, each of them has its own culture, relief, climate and identity, which is why they are divided into five distinct archipelagos.

Known all around the world as must go destination for honeymooners, Tahiti is to be found in the middle of the Pacific ocean. Completely isolated, the island has very few neighbours, the closest being Hawaii 2 538 miles up North. Then comes New Caledonia 2 828 miles away on the West side and the Californian coast, 3 853 miles to the East.

With its 402 mi² and its 184 000 inhabitants, the island is considered as the economic center of the whole French Polynesia.

Its geographical location implies a considerable 12h time difference compared to France during summertime and 11h during winter.

Often mistakenly considered as a simple stopover, the island is made of extinct volcanoes and divided into two parts: Tahiti Nui (the big Tahiti) and Tahiti Iti (the peninsula), which are both connected thanks to the Isthmus of Taravao.

Generally referred to as “the sister island of Tahiti”, Moorea enjoys a great reputation, partly due to its geographical proximity to the most famous island of Polynesia. Located 10 miles away from Tahiti, it can be reached in about 30 to 45min by ferryboat, which is why so many tourists and locals choose to go there everyday.

Where is Bora Bora?

Known as the “Pearl of the Pacific”, Bora Bora is a small island of five miles long and three miles wide, surrounded by plenty of islets. Located 158 miles to the Northwest of Tahiti, its blue lagoon and famous Mount Otemanu start showing under the clouds after a quick 50min flight from the Tahiti-Faa’a airport.

Where is the Society archipelago?

Famous for their relief, their lush valleys, their impetuous waterfalls and crystal-clear lagoon, the Society islands are located at the very West of Polynesia. They are divided into two groups: the Windward islands such as Tahiti, Moorea or Tetiaroa and the Leeward islands (Bora Bora, Huahine, Raiatea, Taha’a and Maupiti).

Where are the Tuamotu islands?

Made of several islets and scattered with atolls gently placed over the ocean, the Tuamotu are genuine rough diamonds. The most famous islands, such as Rangiroa, Tikehau, Fakarava or Ahe can be reached in a 1h/1h30 flight from Tahiti. However, the archipelago is so big that it is sometimes necessary to resort to other kinds of means of transport to reach the furthest islands.

Where are the Gambier islands?

Deeply marked by Catholicism and known as one of the main exporters of black pearls, the Gambier islands are to be found about 995 miles to the South-East of Tahiti. Rikitea and Mangareva, for instance, are prized for their architectural wonders and white-sand beaches.

Where are the Austral islands?

Mystical caves, archeological vestiges, wild beaches, coral, whitewashed walls… welcome to the Austral islands! Even though the islands happen to be small, the archipelago is wide, from Tahiti it will take you 356 miles to go to Rurutu and 808 miles to reach Marotiri.

Where are the Marquesas?

They inspired a couple of artists, like Paul Gauguin and Jacques Brel and yet they represent the most isolated archipelago of Polynesia. Nicknamed “Henua Enana”, the Land of Men, it is located 932 miles away from Tahiti.
Are to be distinguished the northern islands (Nuku Hiva, Ua Pou, Ua Huka, Hatutaa, Eiao and Motu One) and the meridional ones (Hiva Oa, Tahuata, Moho Tani, Fatu Hiva and Motu Nao).
Since French Polynesia is as big as Europe, there is a slight 30min time difference between Tahiti and Hiva Oa.

You get it, Polynesia is a wide and diverse territory… Feel free to take a look at our Island guide section to discover which islands suit you best.

Back to top
We are using cookies to provide statistics that help us give you the best experience of our site. By continuing to use the site , you are agreeing to our use of cookies. Ok