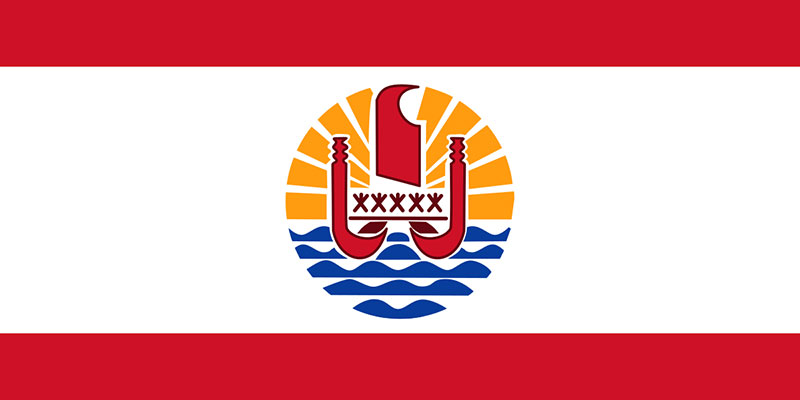 Fluttering in the wind, used as a pareo or a beach towel or proudly displayed by our sports ambassadors, wherever you go in our islands, you are likely to find a Polynesian flag.
Easily recognizable, it encounters a tremendous success overseas and counts among the pictograms developed by famous multinational companies (hello brand new Facebook emoji…).

At first sight, the Polynesian flag is utterly conventional : two horizontal red strips surrounding a large white one. Right in the middle, a typically local double outrigger canoe. On the face of it, the standard seems to borrow some codes commonly used by other nations. But when we take a closer look, several details enable to distinguish it. Even though they are often used nowadays, these symbols convey a great meaning. The Polynesian flag grants its autonomous status to the territory, it gathers people around principles and gives them an identity.

Just so you know, while the sunbeams drawn by Alfred Chalons were initially of a gold color, they turned orange, like the color of Tahoera’a Huira’atira party, at the time they had the majority at the government.

At the very beginning, a predominant color: red. The red of royalty, historical legacy of French Polynesia, inherent part of its cultural heritage. Red like the maro ura, the belt of crimson feathers which used to be worn by people of royal descent only. This color used to play an essential role within the hierarchical organization of the Polynesian society.
Besides, former versions of the Tahitian flag already featured this component.

Adopted on November 23rd, 1984, the armorial bearings were drawn by Alfred Chalons, technology and arts & crafts teacher at the la Mennais middle school of Papeete. They link both History and prospects. Among them are to be found the pahī (double outrigger canoe), the sunbeams, the waves of the ocean and five tikis.

Ultimate Polynesian emblem, the outrigger canoe embodies the travel, exploration and spirit of conquest. Like a catamaran, the pahī is a large double outrigger canoe equipped with a sail, it is on board this kind of ship that the first migrants settled in what would become our islands and peopled the Polynesian triangle. Often used by local shops and touristic establishments, the symbol still conveys a great message and implicitly refers to quite a few values.
First and foremost, it underlines the royalty theme once again, as the foresaid vessel was considered as the sacred attribute of kings and chiefs, at the time. Furthermore, it denotes a real federating power as it reminds Polynesian people of their illustrious past of outstanding explorators.
It embodies a whole social organization, a way of life, and highlights courage, solidarity and authenticity.
It is a great means of transport and communication, it opens up the scope of possibilities and is directed towards future. It symbolizes hope and revival.
On the other side, it testifies of a great attachment to traditions and ancestral values.
Even nowadays, it remains an efficient subsistence tool and is namely used for fishing. It brings the islands closer, shortens distances and gathers people.

Proudly erected on the outrigger canoe, the five statues are somewhat reminiscent of the archipelagoes which stud Polynesia : the Society islands, the Australs, the Gambier, the Tuamotu and the Marquesas. Indissociable, it shows that beyond the cultural differences, the islands are fundamentally bound to one another.

Like in most parts of the wolrd, sun symbolizes strength, power and life. It reinforces the idea of wild paradise where people live in affluence and corroborates the myth of Polynesian overall buoyancy.

As for the waves, they form with the sun the circle of life and illustrate all the benefits of the sea. Even though they are attached to their land, the Polynesian people are linked to the ocean, which is why it occupies a great place.

Facing us, in full sail, pushed by the blow of life and surrounded by a halo of light which announces favorable auspices, the outrigger canoe of Polynesia seems to be ready to face future and conquer brand new horizons.