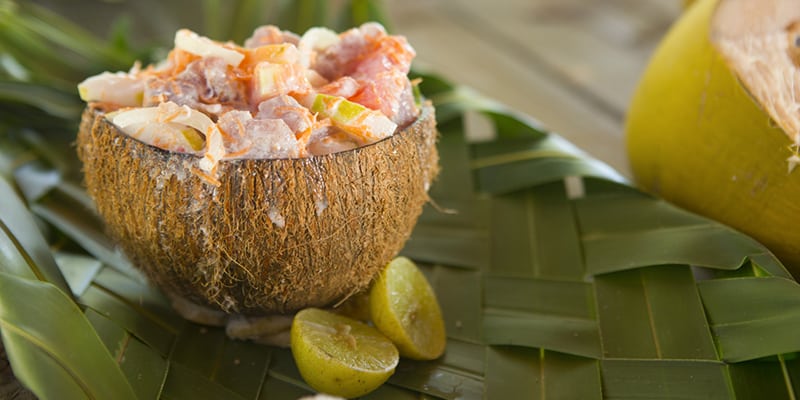 We have prepared for you… a tahitian raw fish marinated in coconul milk!

This time we have decided to introduce you to a traditional gourmet specialty of French Polynesia, the tahitian raw fish.

In Polynesia, we use most of the time bluefin tuna, white tuna, barracuda or skipjack for this recipe, but you can also use salmon or even burbot … In short, all fish fillets without skin and with rather firm flesh.

But before embarking on the preparation of this delicious dish, let’s talk a little more about this typical Tahitian recipe…. 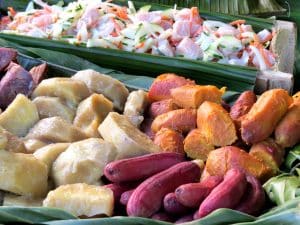 A bit more about the tahitian raw fish…

Traditional specialty of French Polynesia, we could compare the tahitian raw fish to the cevice that is typically prepared in Latin America. The raw fish marinated in coconut milk is at the center what is called ma’a tahiti or tahitian cuisine, and all the occasions and celebrations are good to prepare one. This ma’a tahiti incorporates starchy foods such as taro and sweet potato. Among the fruits, there is the coconut and the uru, from the breadfruit. Are added to this all types of fish, shellfish and pork preparations.

Although traditionally savored with local products such as the mitu hue (a polynesian condiment) and the other delights composing the maa tahiti that have just been mentioned, the tahitian raw fish can be served as a starter or even as a main course and marries wonderfully with rice! Indeed, nowadays, this recipe has been adapted to metropolitan and chinese influences and several variants exist. It is therefore entirely possible for you to prepare a tasty Tahitian raw fish at home, without necessarily being under the coconut trees.

The necessary ingredients (for 4 people): 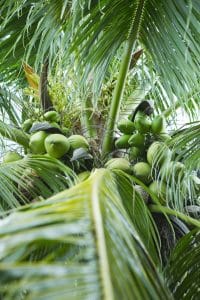 1 / Cut the fish into cubes.
2 / Sprinkle the fish with the juice of the 3 lemons, add salt and mix everything.
3 / Let marinate for 5 minutes until the fish turns white (the acidity of the lemon will “cook” the fish very slightly).
4 / Remove the extra lime juice.
5 / Meanwhile, julienne onions and carrots, slice the cucumber and cut the tomato into wedges.
6 / In the dish where the fish is, add the vegetables, garlic and grate some fresh ginger (or 2 nice pinches of ginger powder)
7 / Add salt, pepper and mix.
8/ Coat with coconut milk, season the seasoning and sprinkle with chopped green onions. 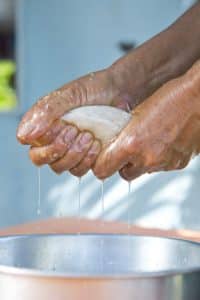 Your raw fish marinated in coconut milk, the ultimate tahitian meal, is ready to be tasted! 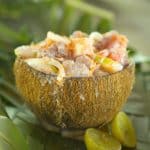