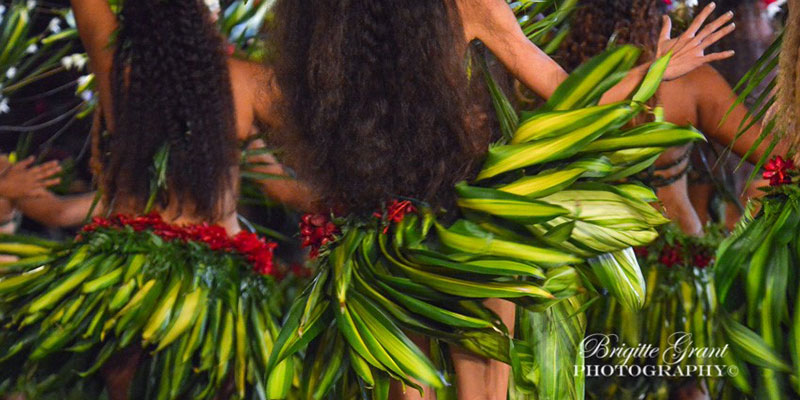 I have tested for you… the Heiva i Tahiti!

More rustling, dancers out of breath, a bead of sweat stooding out on a forehead which drops in the to’ere hurly-burly. The wild sound of the pahu and then nothing, nothing but the interaction between a group and its audience : shivers, songs coming right from the guts filling your eyes with tears…
The heiva is a time of sharing, it is the encounter between a choreographer and an author, the encounter of bodies, of culture and movement.
This month, let me introduce you to my own perspective and the origins of the most expected event of French Polynesia.

The history of the Heiva i Tahiti…

The christianization of the various archipelagos by the London Missionary Society at the beginning of the 19th century considerably marked a change of direction in the Polynesian history. Considered as indecent, cultural manifestations were prohibited and two measures were enacted against « songs, games and lascivious entertainment » respectively in 1819 by King Pomare II and in 1842 by Queen Pomare, both influenced by religion.
Going against the moral standards back then, the ori tahiti was also prohibited in 1820. Since 1847, the heiva celebrations have been tolerated according to some conditions and in defined places. It all started again in 1880, through the himene, traditional singing, at first.
The idea was then to federate Polynesian people around the festivities of the 14th of July. And this is how the Tiurai was born (from the English term « july »). Thirthy groups had the occasion to perform but the event was mainly about military parades and torchlit processions, not even close to the heiva spirit.

Regarding dance, it is only in 1956, thanks to the initiative of Madeleine Moua, accompanied by her « heiva » group, that the heiva starts to resemble what it looks like nowadays. Missionary gowns are left aside in favour of traditional costumes, choreographies are reconsidered and steps are reinvented.
In 1985, Gaston Flosse, who used to be the president of French Polynesia, decides to rename the « Tiurai » in « Heiva i Tahiti » in order to highlight the brand new autonomous status of the territory. 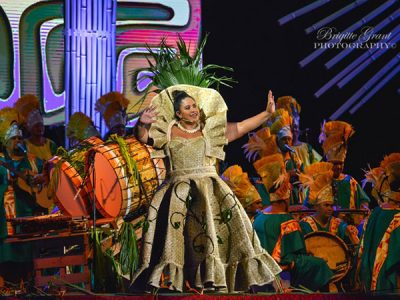 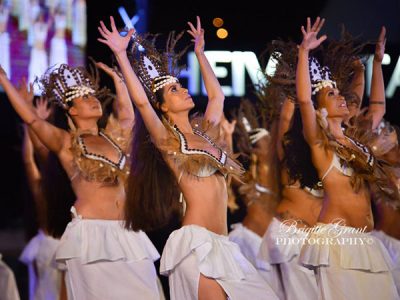 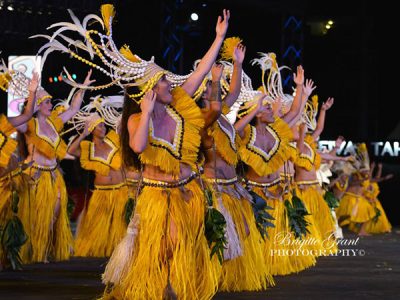 Thursday July 4th, about 120 people are holding hands, their heart beating : it is time to spend some moments in silence, anticipate and pray, the calm before the storm. We all realize how lucky we are to have found each other, to have lived this extraordinary experience and to have the opportunity to perform on To’ata.
The silence and then the scene frenzy. Spotlights beaming on bodies, bodies moving under a thunder of applause and this buoyancy, this exaltation, always.

Shouting your joy, claiming your language, dancing your culture and feeling alive, being to the world… This is what it is all about.

Polynesian people are known to be spontaneous and ecstatic, which may explain their inclincation towards dancing and singing. The ori tahiti is an art form like no other, like a will to express this unutterable strength which comes from the inside as soon as the to’ere start to beat.

From twilight to bright spotlight

The heiva is a chiaroscuro which is born in the darkness of a wasteland and finds its outcome under the lighting of To’ata. The beauty of this oxymoron lies in the preparation and the feeling of accomplishment it inspires.

The fervour, the apprehension followed by an indescribable feeling of fulfilment mark the consecration of five months of hard work. Whatever the category, the heiva implies an intensive training: three hours a day, four to six days a week. You spend your time with the same people for months until you no longer want to see them and then you immediately miss them when it is over…
What the audience does not see are the financial issues, the organization of tamure marathons, balls, chicken sales, bruises, nights spent rehearsing in the dark and under the rain on the gravel of a car park… It is the wet pareo, the worn-out knee pads, the tensions, the moments of doubt, all these things you forget as soon as you get on stage and which contribute to make the experience even more beautiful.

Even though it is initially all about the mere pleasure of dancing, the heiva has nowadays become a real competition. Whether you want to access the podium or switch from the amateur to the professional category, it is first and foremost about improving yourself and reaching excellence in order to provide a quality show. Making sure the audience only sees the final result and the dancer forgets about the training. 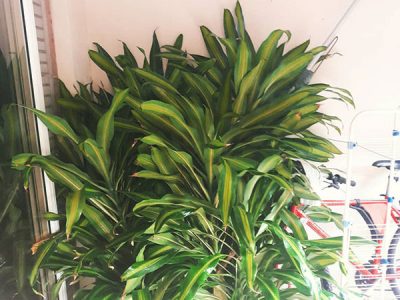 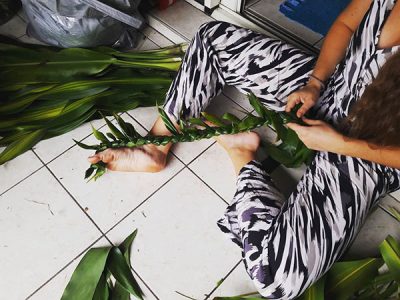 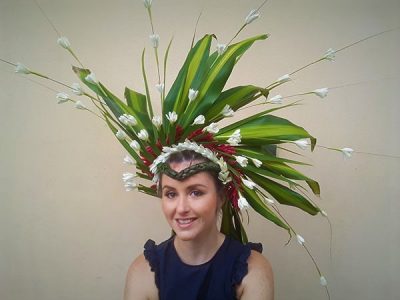 The creation of costumes

The heiva cannot be summed up to mere dancing, it is an art of living. During five months, you put aside a part of your life to focus on a single goal. You forget about the family reunions, the happy hours on a deck, the beach excursions only to rehearse and make your costumes. Of course, you can always call an auntie, known to be good with her hands, or pay someone to do it but it would be a shame not to do it on your own.
It is also by conceiving your costume that you revive ancestral customs.
You can either do like me and head to the HQ every week-end in order to prepare your outfits ahead, beneficiate from the advices of the different group members and enjoy the convivial atmosphere or choose the last minute option if you feel like you work better as you rush.
Never mind, you will get your adrenalin dose when making the fresh plant costume so anticipation is always better…
As the weeks go by, you learn , you improve your manual skills, you help each other and get to learn special tips like putting your auti leaves over the flame to make it more flexible and shiny. Nature and nurture, you become a dancer… 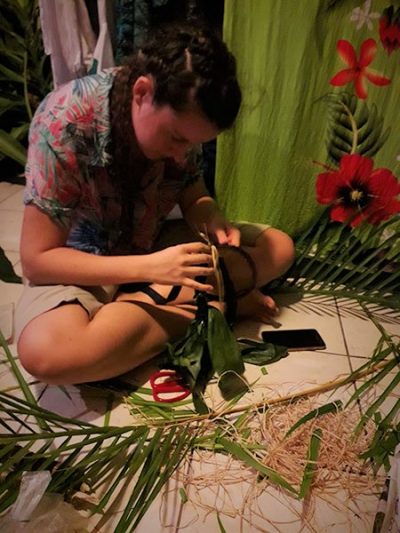 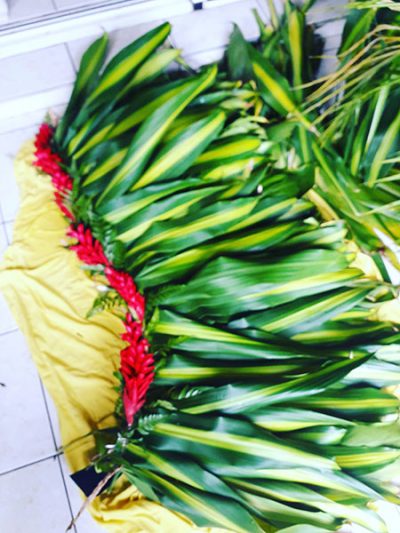 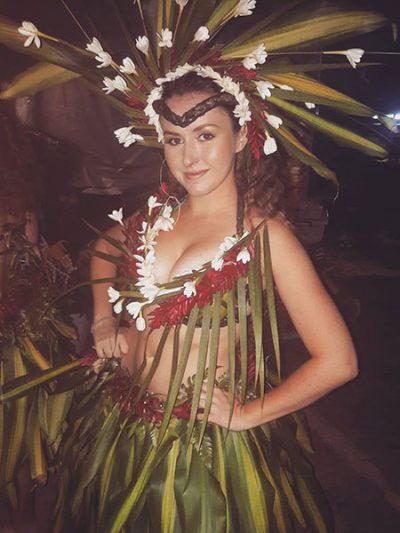 Before getting on stage, we quietly wait for the rāhiri ceremony, an ancestral tradition which is used as a prelude before important events. It is a solemn and emotional moment during which are to be presented the different jury members and group managers. They all promise to respect each other and be objective during the whole competition. Each of them is invited to put down a banana tree leaf, as a symbol of respect and peace, and some offerings like miri or tiare tahiti. 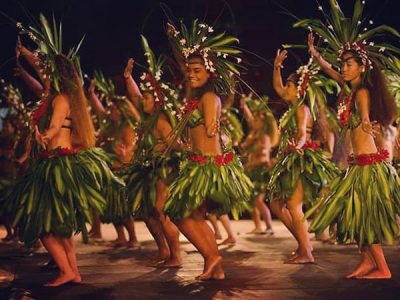 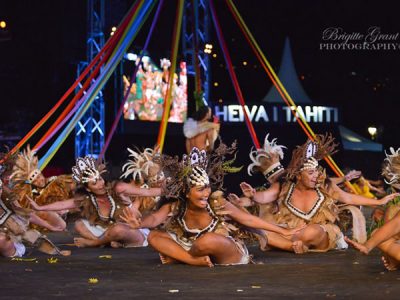 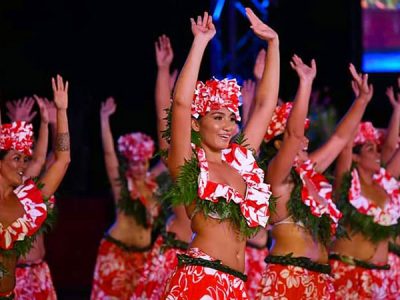 This year, I had the opportunity to dance on the To’ata stage for the first time within the Hura Mai troupe, which entered the Hura Ava Tau category (amateur).

Apetahi Duchemin and Manini Voirin, her author, chose to conceive a colorful fictional show about the rainbow. A theme which deals with the complementarity of beings and elements, the symbiosis between men and women, the earthly and the spiritual, sun and rain which create the rainbow of life.

Beside the pretty colors adorning the sky, the show deals with the role of each in the balance of each and everything. Thus, the rainbow is perceived as a gift from the Gods to men, a present which makes our everyday life more beautiful but also reminds us how important it is to preserve nature and the order of things. If opposites attract each other, women are the ones in charge of bringing softness, roundness, voluptuousness and comfort to the impetuousness, virility and pride of men. They polish their heart the way one does with a stone, make men realize they need to put their pride (te’ote’o) aside so as to find back their balance. The show ends with the reunion of these opposites.
Life is made of ordeals and little pleasures: without sun and rain, there would be no rainbow.

All in all, the heiva is a form of introspection, a way to get closer to nature and your own self.