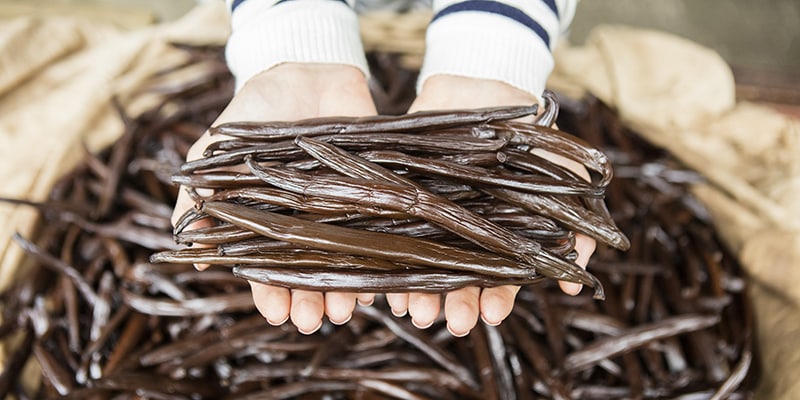 “Te Vanira”, history and benefits of this great aroma!

Native from Mexico, the vanilla was originally used by Aztecs in order to flavour cocoa. Edmond, a young black slave from Bourbon Island (Reunion Island) was the very first to discover the artificial fertilization with the thumb.

The Tahitian vanilla, called Vanilla tahitensis, is an orchid which resembles a vigorous liana that florishes around trees or stakes where it hangs on. Truth is taht it is quite difficult to cultivate as it requires a meticulous and methodical work, a great working force and, first and foremost, a lot of patience.

Awarded several times during agricultural contests, our Tahitian vanilla is well known around the world for its exquisite taste, its exceptional quality and its fleshy and generous overall aspect. Its scent releases an aroma of exclusive quality. Cultivated and treated carefully, it is used by the greatest chefs, may it be for cuisine or pastry. 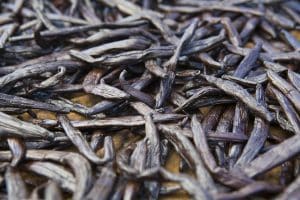 The Tahitian vanilla owes its reputation to its subtle flavour. The reason of this preeminence lies in the Vanilla Tahitensis’ pod itself, which is the only one not to split up before maturing. This fact allows the plant to produce additional flavours, which are not to be found in any other vanilla in the world.

In other words, the Tahitian vanilla is the only one whose pod keeps growing up until it reaches maturity on the liana. To sum it up,it implies that the pod turns black while it remains on the liana. Other vanilla species are picked as they are still green and one lets them dry afterwards. 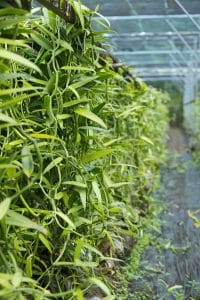 Before the 1960’s, Tahiti used to produce more than 200 tonnes of vanilla per year. Nowadays, the best yields are estimated around around 30 to 40 tonnes a year, which explains its scarcity and expensive aspect. Others vanilla yields around the world can exceed a 1000 tonne, such as Madagascar’s, or even 2000 tonnes in Indonesia.

Sold from 40 000 xpf per kilo (approximately 391 US dollars), the Tahitian Vanilla is perceived as THE luxury vanilla since it became both rare and expensive. Indeed, it now represents less than 0,5% of the worldwide production.

In 2016, French Polynesia only produced 9 tonnes of vanilla; this significant decrease was the consequence of heavy rains and an d significantly lowered temperatures which contributed to make the pods fall before maturity. Moreover, French Polynesia’s plantations only happen to be fertile up to 7 years.

Once this period of time has elapsed, the liana is likely to produce less pods,. Since the majority of vanilla producers started producing around the 2000s, their plants are less and less fruitful. It is time to repalce their plants. 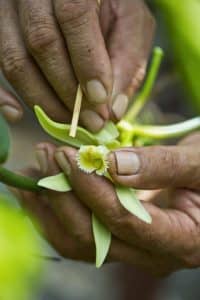 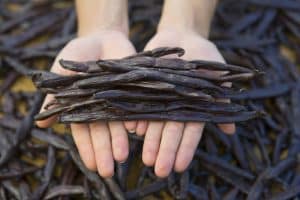 Vanilla enables you to flavour your delicacies, shall it be sweet or salty. In order for it to reveal all its flavors, it is highly recommended to halve the pod for release the thousands of little black beans inside. Vanilla cen be used in planty of f dishes, desserts and even cocktails.

The “Pacific’s Black Gold” is prized by connoisseurs and the greatest gourmet chefs, who are willing to buy great quantities of vanilla in order to improve their dishes and add and exotic taste to their meals.

Now, lets see how you can use it at home:

All in all, vanilla happens to provide many benefits. Used in pod or in essential oil, its antioxydant properties impart it undeniable virtues.

For instance, vanilla is famous for its ability to stimulate the nervous system and overcomet tiredness. It is highly recommended against hysteria, breakdown or melancholy and it boosts muscular efforts. 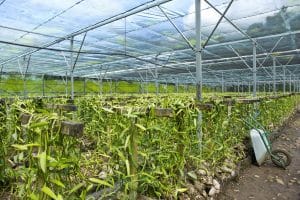 It is also recommended in case of insomnias, stress and loss of libido.

Besides, vanilla appears to enjoy antiseptic propoerties which are often used to relieve animal bites all around the world.

Prized by the cosmetic industry, it also has purifies, hydrates and nourishes while appealing to the senses.

Thanks to Moana Voyages, get to discover Taha’a, the Vanilla Island, where most of the Tahitian Vanilla is produced. Visit vanilla fields, seize the occasion to meet local producers try our vanilla scent massages

Shall you decide to stay with a host or try a luxury resort, there is no doubt this trip will be an unforgettable experience. 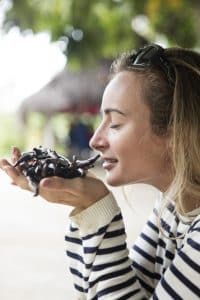 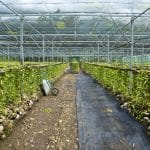 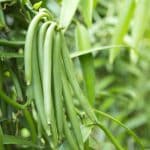 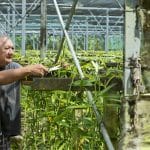