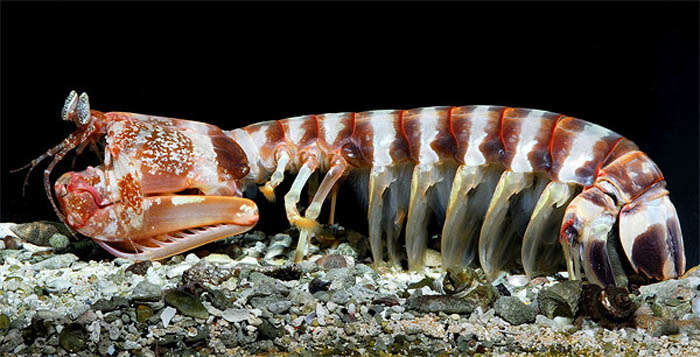 The Varo, a marine animal highly prized in French Polynesia

This week, Moana voyages makes you discover a marine animal highly prized in French Polynesia for its meat, the Stomatopoda, more commonly known in our islands under the name of “Varo”.

The Varo measures 20-30cm, is build like a shrimp and its fold down pincer look like a mantis, hence its nickname, the “Mantis shrimp” or the “praying mantis of the sea”. We may easily recognize the Varo thanks to its stripy clothes of convicts. It is one of the most fast invertebrate of the world which makes it an impressive predator. Its legs, sharpened as a razor are projected on its victims in 2 milliseconds (faster than a 22 caliber bullet) and generate a shock wave able to boil water. Its fishing can therefore be dangerous…
We can encounter the Varo on the coral, reefs or detrital funds. This animal digs a hole in the sand to hide itself, more often in about 30 centimeters of water. The fishing of the Varo can be practiced on foot or in snorkel.
Its fishing is difficult, but well worth it! Indeed, its meat, extremely fine and very tasty, has nothing to envy to the rock lobster.
In French Polynesia, its fishing is highly regulated for conservation purposes. She is allowed from Febuary to October and its size must be greater than 18 cm.