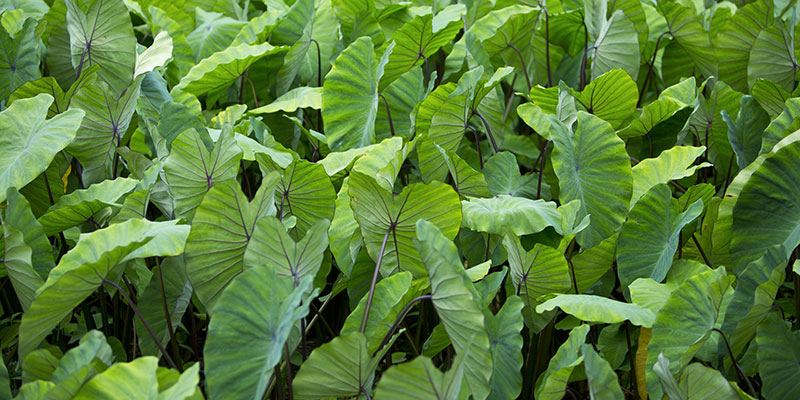 The taro, the Polynesian potato

With rice, uru and puatoro, taro is necessity in Polynesia. Just try to take it off our hands…
Part of our daily life, the colocosia esculenta, as we are used to call it in botany, is a foundation of the islander agricultural economy.

Of Indo-Melanesian origin, the tuber was introduced in Polynesia by the very first Asian navigators. Then started its long voyage within the Polynesian triangle: from New Zealand to Rapanui and then Hawaii including Fidji and the Samoa islands.

As old as the world, the taro is even said to be the most ancient plant ever turned into a cultivated variety. Appreciated beyond the oceans, it was given nice nicknames all around the globe. Nowadays, it is known as dasheen, yautia, eddo or even kalo. 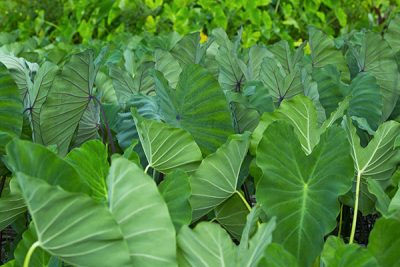 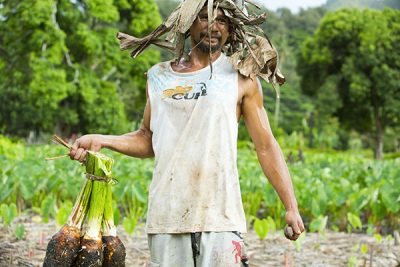 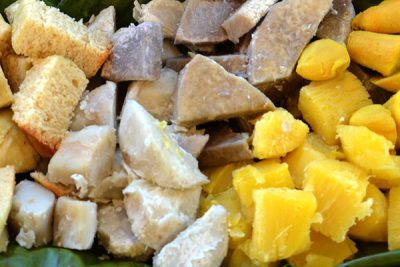 One must admit it, at first sight, the taro look is not quite flattering: a long cream color tuber with a floury texture, covered with a thick layer of soil, not really mouthwatering…. Besides, you’d better get to know it before making a julienne… Eaten raw, it happens to be toxic, due to the tiny oxalate crystals it contains. In order to avoid nettle rash and buccal itches, choose the cooking method of your choice.
In days of yore, we used to put it on white-hot stones while nowadays we rather roast it in the traditional oven. Just like a potato, the vegetable can be boiled in a pot, steam-cooked, cut into French fries, sliced into thin chips or simply mashed.

In Polynesia, sprouts are called fafa. Like spinach, it is generally finely chopped and cooked in the oven in order to prepare the famous fafa chicken with coconut milk.
As for the young leaves, it is called pota and is used to favour chicken meals or prepare yummy soups.

Especially appreciated for its sweet aftertaste, the tuber is also used to prepare taro poe, a deliciously starched mixture. Made out of cassava, the jellylike mix is then cooked in the oven and covered with coconut milk…

Whether frittered, sealed in a pan, steam-cooked, in a gratin or even as an ice-cream flavor, the plant can be declined in various forms but the best of all remains the original taro with some butter, at night, on the mountain, delightful… It is our personal “madeleine moment”. 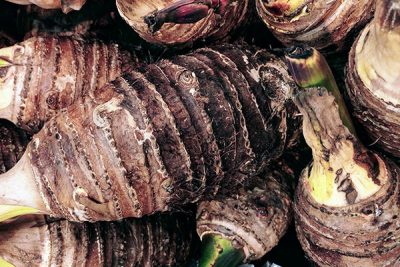 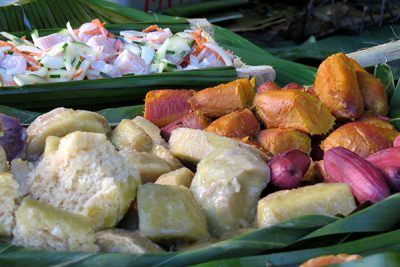 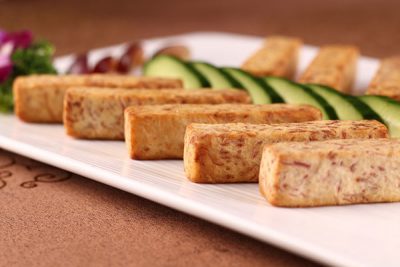 Growing quite easily, the taro likes to evolve in boggy areas. It blossoms in warm and humid fields, guess it is why it quickly got used to Polynesian lands… Its adaptation is so impressive that nowadays twenty-nine species grow under the Pacific sun.

Whether you like it or not, it is in the Austral archipelago that the taro feels better. Our Rurutu friends understood it a long time ago. The taro patch is definitely the place which embodies best the island spirit. In harmony with nature, it matches the landscape and is conceived from an ingenious irrigation network in which each plot of land is supplied with water thanks to furrows. Thus, even though the plant does not require a lot of care, its setting up can take quite time.

At dawn, the farmers pack their sandwich and machete and go down the coral soup road, heading to the swamp. When the sun rises you can see the banana tree hedges surrounding the sinuous farrows crossing the harmonious shapes of the pa’I taro.
Way more than just a vegetable, the taro embodies on its own the Polynesian conviviality, its intrinsic generosity and ability to share. If nowadays each family owns its personal plot within the communal patch and passes it from one generation to the next, there was a time when the whole lifting used to be redistributed within the village. Nevertheless, this ancestral method goes on through the pupu ohipa, these voluntary working groups which keep on developing new skills.

What can best depict solidarity than the labour of men at dawn? First step consists in ploughing thanks to a ra’au tanu and to dig 20cm deep holes inside which we plant the cuttings. Coconut and banana tree leaves are then put on the ground in order to hold the weeds back, protect the seedlings from the sun and preserve humidity. As it deteriorates, it makes a great compost.

The main difficulty consists in maintaining the irrigation canals, one must make sure water keeps circulating and keeps enriching the soil with alluvion. If it stagnates, taro rots. All these efforts are however rewarded eight to eleven months later. Chen ripe, the root can weigh up to 5kgs, no need to say it can satisfy quite a few appetites.

Thus, the taro enabled Polynesian people to provide their needs for centuries, whether during migratory periods or in hostile environments.

Perhaps is it why Marquesan people strove to conserve this precious gift under the form of a fermented paste: the popoi. Once cooked, the tubers are peeled and mashed with a penu to create a thick mush which is wrapped with auti or banana tree leaves. In former times, everything was then sealed up in stone cylinders, which were half-buried in order to face the dry months. Nowadays, although the tradition becomes lost, we like to lace it with honey or coconut milk. 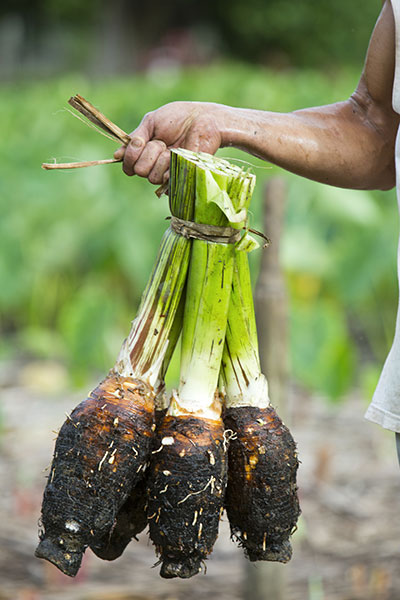 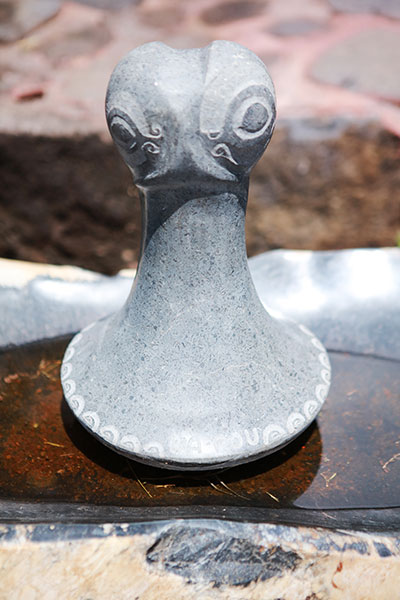 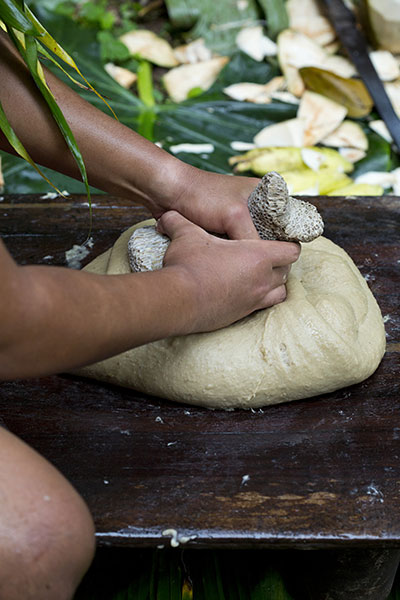 In olden days, Polynesian people discovered the anti-inflammatory, painkiller and digestive properties of the taro. The leaves help treating superficial skin lesions and can be used as a deodorant while the flowers relieve stomachache.

Rich in starch, iron, vitamins and amino acids, the tuber turns out to be a great anti-anaemic and antioxidant as well. It is said to help fight cardiovascular diseases.

So, now that you know, feel free to take twice more taro at your next tama’ara’a…