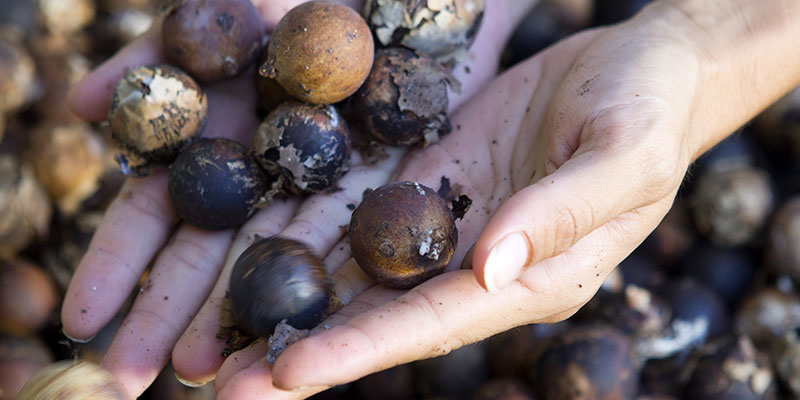 The Tamanu Oil : Its Story & Properties

Tāmanu ? That doesn’t ring a bell at all… and yet, if you ever came to Tahiti, its peculiar smell might be familiar… You may have never noticed it as you were searching for a shady spot while wandering between the trees of the Asssembly of French Polynesia. However, if somehow you decided to listen to the advice of a māmā to soothe the itching of a mosquito bite, you may have found yourself coated with tamanu oil and, believe me, you would definitely remember its smell.
Here, everyone owns a bottle or two, whether it is on the shelf of the bathroom, hidden in the glove compartment or slipped in the purse. It is like our homemade tiger balm, a cure for everything…

Straight out of Asia, the Calophyllum Inophyllum is a tropical tree which thrives by the Indian and Pacific oceans. Looking just like the Alexandrian laurel, it is known under the name of Temanu in the Marquesas islands, Kamanu in Hawaii, while it seems like everyone calls it Takamaka elsewhere. Like most of us, it enjoys the Polynesian climate and grows naturally by the beach, its intertwined branches overhanging the motu. Slender and charismatic, it is the perfect element to add to a pedestrian alley lacking a bit of character.

If we know a lot about it in our islands, it is because it grows so easily. If you want to grow a tāmanu, you just have to remove the shell and let the seed germinate for about 20 to 24 weeks. During the five first years, the plant can grow up to 1m high and 24 inches wide every year. Then, the progression slows and Mother Nature brings its magic, the first flowers blossom after seven or eight years. Afterwards, the tree gives little round-shaped almonds which fall down once ripe and can, in turn, become young plants. With its twisted trunk and dark green leaves, the tree can reach up to 25m. Its tiny white flowers give off a sweet scent and are still used nowadays in the making of some traditional monoi. 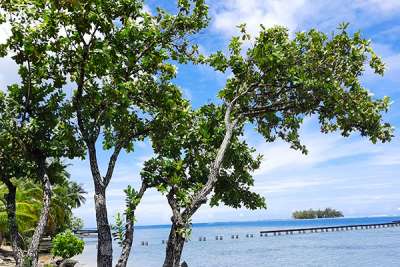 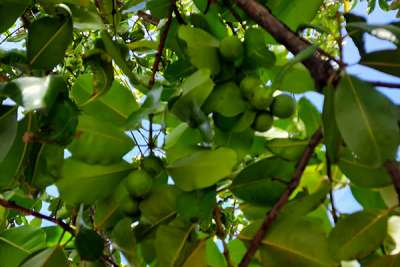 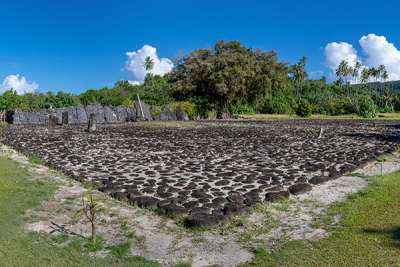 The Role of the Tamanu in the Polynesian Culture:

«A pāra’u na i te pehu !»
If you take a walk at dawn in the islands of Tahiti, you will probably see a few māmā bustling about their garden with a pareu tied around their neck and a rake in their hands because, let’s face it, owing a tāmanu requires a lot of maintenance. Every day, one needs to pick up the fruits and leaves which fall the day before.

Even though it is not really a big thing anymore to have a tāmanu by your house, the tree used to be sacred. In days of yore, the ‘ati – as you may also call it – was planted around places of worship and was considered tapu. Its rot-resistant red wood was not to be touched by ordinary people and was mainly used to carve the to’o (wooden idols) displayed around the marae. The tree was said to be particularly appreciated by gods, as they could shelter from the rain, shade themselves from the sun and observe the humans without being seen. Intrinsically associated with the divine, the importance of the tree is such that we defined specific terms according to the place where it stands. Thus, the ones which delimit the marae are called nohoahu, after the name of the priests which officiate there. If you ever go to the Raromatai, on the island of Raiatea, you will have the opportunity to see some of the most gorgeous specimens around the famous “marae Taputapuatea”, basis of the Maohi culture.

According to the legend of Tane, Ta’aroa, the creator of everything, used the elements of nature to model the son of Atea ta’o nui [the infinite sky] and Papatu’oi. As he wanted to get closer to perfection, he instilled the greatest qualities of the trees in him. His epidermis was made out of the barks of the ‘atae, hotu (spindle), pūrau (hibiscus), coconut tree, mara, toi, aito (ironwood) and ‘āpape while the bark of the ‘ati was added to bring more shades to his work of art.

People often forget about this but, in the elder days, the pōro ‘ati, the little almond produced by the tree, was used to color tapa with natural plant extracts. The tree has always played a prominent role within the Polynesian society. 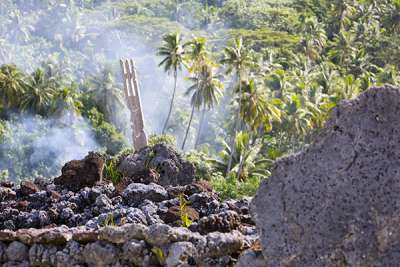 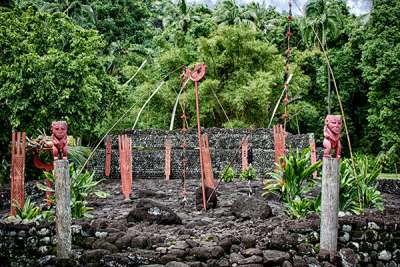 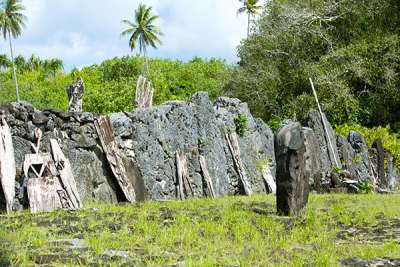 The Tamanu and its Properties:

Little did we know that these tiny green balls held one of the most precious secrets of Polynesian people and yet, the almonds contain what we now call the magic healing oil.
Fortunately, this ancestral know-how passed on from generation to generation and, even now, everyone knows an auntie who likes to make a few bottles of it during her spare time. If only we just had to open up the shell and pour the oil drops on our body… The making of the tāmanu oil requires a bit of patience.
First of all, one needs to wait for the fruits to ripe, once they take this ochre color. After putting it all in a great tura (bin), it’s time to remove the shells to keep nothing but the almonds, that we will let dry outside, under the sunlight. After a few weeks, the oil can be extracted by cold pressure and, once filtered, it takes a nice olive color, there you have it: the green gold of the Pacific.

The tāmanu oil was immediately introduced to the Polynesian pharmacopeia. We use it at every stage of our lives. At a very young age, the babies are rubbed from head to toe so as to soothe red patches and repel mosquitoes. A little massage helps with the pain. However, since it contains a lot of resin, it may turn out to be quite rubefacient and itchy, which is why it is always best to dilute it, with monoi for instance.

Its antiseptic and healing properties are specifically interesting. Thus, as one grows up, they can use it to soothe a cutaneous infection, a burn, a post-operative wound or to relieve scabs and ulcers. In everyday life, you can pour a few drops on your skin after shaving, to deaden a mosquito bite or soothe a sunburn. Eventually, tattoo artists recommend to apply it on your tātau to help the healing.

Another good point is that its anti-infection power acts like an antibiotic and contributes to reinforce the immune system. Advice number one: you should always carry a spray on you !
Besides, if you apply the oil on your veins and capillaries, it improves blood circulation and participates to lymphatic drainage, it is ideal to fight against swelling, the feeling of heavy legs, rosacea, varicose veins and to limit the risk of phlebitis.

Being one of our greatest allies, the tāmanu is often used in cosmetics. Its hydrating, antioxidant and antiradical power makes it a real Swiss knife, you can use it under any circumstances. Once applied on the skin, the oil prevents the apparition of wrinkles and stretchmarks. Its moisturizing texture nourishes, softens and tonifies the skin and offers a slight UVA and UVB protection. Its regenerating power contributes to revitalize the scalp and brings silkiness to your hair.

Eventually, its analgesic properties help dealing with the pains related to sciaticas, lumbagos and other rheumatisms. 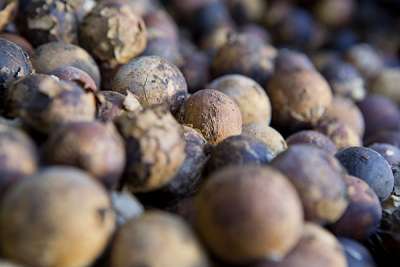 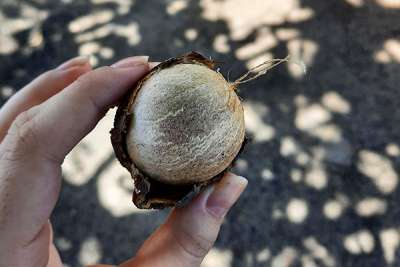 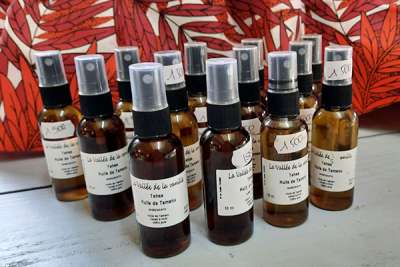 Other uses of the ‘Ati:

Even though it cannot compete with the oil, the ‘ati in itself happens to have a few other qualities. The leaf and bark decoctions are said to heal some skin diseases, help get the temperature down or soothe headaches.
The flowers are used to perfume some monoi and decorate lei while the wood was initially used to create outrigger canoes and now remains a great part of local craftsmanship.
In the Marquesas archipelago, the shells are often painted and added to necklaces. Nevertheless, if you are not into jewellery, just burn the shells and hey, you now have a homemade repellent!

Its strong nut smell may not be as pleasant as that of our tiare flowers but the tāmanu oil is one of those natural miracles which makes our life easier. It has now become part of our daily life and shall definitely become one of the souvenirs you’d keep from you stay in our islands.