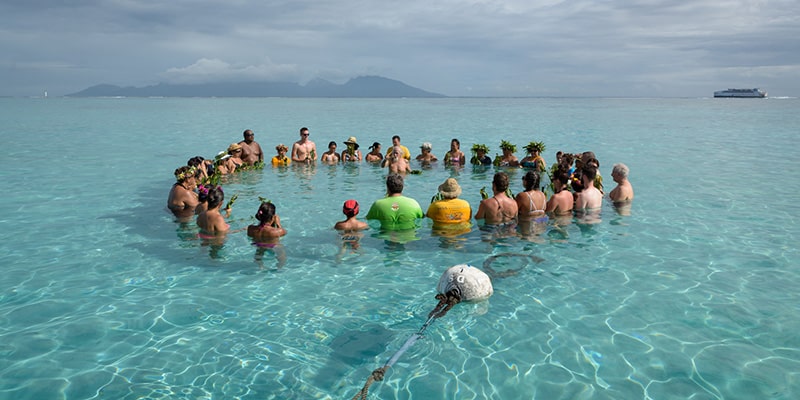 There are numerous traditional lagoon fishing technics, those technics can change from islands to islands. This week, let’s discover a very ancient fishing method did mostly in our leeward group islands, particularly in Taha’a, the stones fishing.

In French Polynesia, fishing is present since first generations and is part of patrimony and culture of French Polynesia. Polynesians could experience lots of fishing technics while trying to find the best one.

Some fishing technics were such successful that they became rituals or ceremony that marks a strong event on the island. Among them, the stones fishing, a very old fishing method rooted in Tahitian culture, born in Maupiti.

Like for the “Ature fishing”, the traditional stones fishing unites the entire village, and can also unite the whole island sometimes. 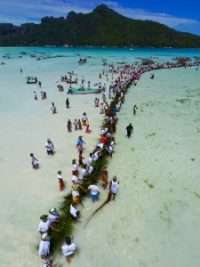 Supervised by a ceremony master, the stones fishing is planned months before the D day. The ceremony master gathers his committee and discuss about a fixed day to do it, a departure point (mostly at the edge of the interior reef), an ending point (mostly on a beach) and about boats placing.

The stones fishing ceremony always begin with a prayer made by the ceremony master before boats landing. Once this prayer finished, the fishing departure is announced by the sound of marine conchs called “PU” in Tahitian (can be translate as big shell).

During around 30 minutes to 1 hour and a half, all the fishermen make a long line with their embarkations and begin to hit the water surface with a stones fixed on a rope for frighten fishes, block them and force them to go on the same direction than fishermen.

Fishes are afraid, so they do not approach to those boats and try to escape as much as they can.

Not so far from it, the rest of the village is impatiently waiting for fishermen arrival. A big net made with braided coconut palms long from more than 1 km with a diameter around 200 meters is waiting for those fishes that will be blocked in this enormous fish trap.

Once this step is done, they just have to pull this vegetal fish trap to the beach. Generally, important persons present during this ceremony have the honour to harpoon the first fishes. The entire village is mobilised for make this moment unforgettable. Good vibes are here, you can easily read joy on everybody’s face that is part of the ceremony that became rare nowadays but still very pleasant.

Traditionally, this fishing ceremony was organised for celebrating the crowning of a new king called “Arii” in Tahitian. This fishing method, a bit plentiful, is the right moment for gather all the island residents for reunion them around a big lunch called “tama’ara’a” in Tahitian and a “bringue” (Polynesian feast rhythmed by guitars and other ukuleles that are following the rhythm of Tahitian sings).

Nowadays, this technic is more rarely used but it stills as old times, a really popular feast for all of the residents. 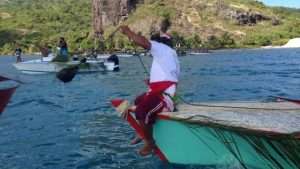 In spite of the past generations, the stones fishing did not disappear and stills present in Polynesians lifestyle. The conservation of those rituals and ceremonies is one of our Culture Ministry priority.

Associations are created for contribute to Polynesian patrimony protection and tries to organise at less 1 traditional stones fishing ceremony per year and tries to inspire children by make them fishermen for 1 day. It is a good way to aware them about our culture disappearing and encourage them to make it live and not forget it.

During lasts stones fishing organised in 2000’s on Maupiti island, tourists from the whole island guesthouses had the chance to be a part of the mythical stones fishing ceremony from the beginning to the end.

As locals, they also thrown stones on water, posed and pushed the fish trap and participated at fishes’ harvest. However, it was very exhausted for them but especially unforgettable. This event stills a source of discoveries about the Polynesian patrimony for tourists that are part of.

Stones fishing became very unusual in French Polynesia, this event is not to missed if you have the chance to do it during your trip in our islands! A chance that not everybody has during his trip.

Stones fishing, a way of fishing present since the dawn of time in Maupiti and still very important for Polynesian peoples. 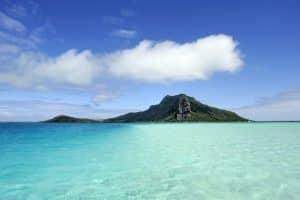