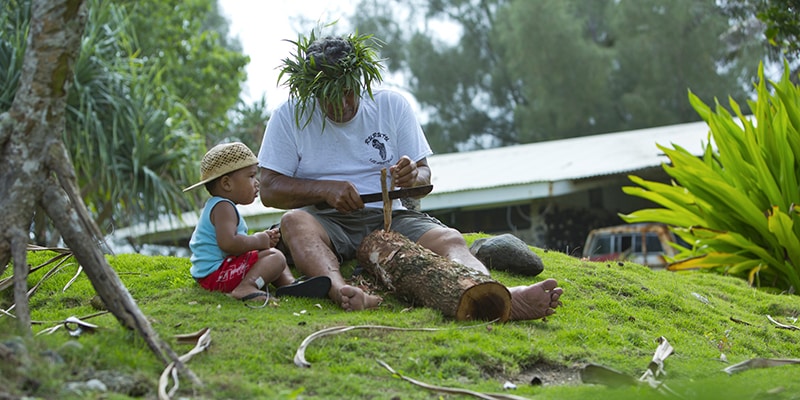 Culture has a central part in French Polynesia. Indeed, it is strongly present in many aspects of the local population’s life. The local language is in turn a main element of this rich and attractive culture. In Tahiti and its islands, besides French, you can find seven different languages altogether: Tahitian, Pa’umotu, Marquesan, Austral, Ra’ivavae, Rapa and Mangarevan. These seven languages ​​are both unique and interrelated. Today, although French is widely spoken across the vast majority of the islands of the 5 Archipelagos, these local languages ​​rightfully retain their significance. These are inseparable from the colorful identity and imagery of our islands. The french polynesian names are a beautiful illustration of these lingering linguistic traditions.

Choosing a name for a child is always an important step, a decision that needs to be carefully thought-through. In French Polynesia, beyond matters of esthetic and the desire to honor ancestors, there is also the profound dimension of the meaning of names. Here, probably more than in most other places, in the traditional civilization the first name chosen was a strong symbol of the identity and social position of the child who wore it. Ranitea, Teva, Vahine, Manea, Vehi, Tamatoa, Arii, Mihimana … These tahitian names, each more beautiful than the other, carry with them some profound meaning: they symbolize or represent nature, personality traits, values, beliefs and legends. Whatever they express, the notion of transmission is a central point when it comes to polynesian names.

A closer look at some tahitian names

In French Polynesia, there is a large diversity of names compared to the number of births because the choice for these is very open. Sometimes polynesian names even differ across the archipelagos.

Let’s just look at a handful of these tahitian names to get a glimpse of their richness. The etymology of this language is fascinating. The oldest and best known polynesian names in the local culture are often the names of divinities found in legends. Hina refers to the goddess of the moon. Maui, the half-god is linked to different legends and famous throughout Polynesia. Beyond these inescapable examples, there is a large range of other polynesian names full of poetry and exotic sounds.

And that’s not all. Of course, you can also combine these.

Poe: Pearl. Poerava: Black pearl. Poema: Pearl of deep seas. Poehina (remember the meaning of Hina): The pearl of the goddess of the moon.

Ari’i: the prince or the king. Ariiheiva: The prince of the games. Manuarii (remember the meaning of Manu): The royal bird.

Because polynesian names are the result of associations that have no limits, they continue to evolve over time, between traditions and new representations. Some are relatively short and others are particularly long. A challenge to pronounce for most of the happy travelers who, during their stay, train to master their complex and intriguing pronunciation.

Today, it is very common for families of other origins living in French Polynesia to choose a local name for their child. This choice among families coming from France or elsewhere reflects the vivacity and influence of polynesian culture. Sometimes, the craze for these names extends even beyond Tahiti and its islands. Occasionally, as a tribute to a destination that touched them or simply because they are sensitive to the beauty of the local language, travelers who fell in love with the Fenua (land, country) decide once they have returned home to give a polynesian name to their child.

In French Polynesia, each archipelago and each island has its own history and traditions. A wealth to discover absolutely that we find in these polynesian names whose sounds, unique and attractive, are an invitation to travel. Full of poetry, these names are a beautiful tribute to the culture of our sunny islands.