I have tested for you: the Polynesian Traditional Sports Games

July is a month of festivities in Polynesia. Indeed, it is that time of the year we celebrate the Heiva. The most famous part of it is the Tahitian dance competition, the oldest dance competition in Oceania, which gathers more than 30 000 spectators from all over the world.
Less famous but very close to the heart of Polynesians, it is also the occasion to celebrate the Polynesian traditional sports games named “Tu’aro Maohi”.
I therefore attended these unconventional but 100% Polynesian games…

As soon as I arrive in the park where the competition is organized, I hear yelling and a crowd gathering…I immediately thread my way and glimpse in the middle of this human arena, a man with a huuuuge stone in his arms, feeling not very comfortable with it! I understand why! People around me explain that the stone can weight from 80 to 150 kilos and that he has to lift it within the shortest time. Each competitor has 3 attempts to show its best. I have to tell you, there is no handle, ropes or anything that could help him on this stone! Stupid stone! And I am also been told that women too have their own stone lifting competition… It sets the tone! 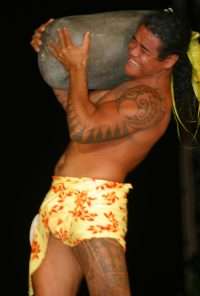 A bit further from here, I can see up in the air a coconut pierced by a big wooden rod swinging many meters above the ground…weird..It is the javelin throwing competition that is about to start. Javelin throwing..it quickly reminds me my athletics class in primary school. Bad memories with this huge rod difficult to handle and nearly impossible to throw away with my weak arms…and if, by miracle, I succeeded to have the thing off my hands, it would collapse few centimeters away… 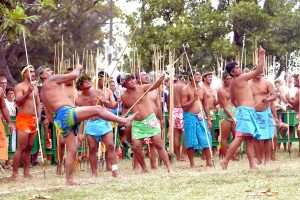 But here, they have a totally unique way to play this game… Why not throw this javelin up in the air, to pierce a coconut perched at 9 m from the ground? Athletes, placed 22m away, have 10 javelins in hands and 7 minutes to target the coconut at its highest point. Difficult thing to do …But imagine when 20 competitors try to do this at the same time.. Hard to find a leaving place for your javelin on this poor coconut!

The coconut occupying a prominent position in Polynesian life, no wonder it is highlighted during the festivities of July. Each team is composed of 3 candidates, with only the help of an axe, a curved blade and hessian bags. The team has less than 3 minutes to split approximately 200 coconuts! I seat very close to a team to admire the show and don’t miss a thing…well that was not the greatest idea.. Sure thing, I didn’t miss a thing …I received splashes of coconut during 3 minutes! Note for next time, seat a bit further. But what a demonstration of dexterity and strength! When I see how I struggle to open just one coconut, I realize how hard it must be for them! 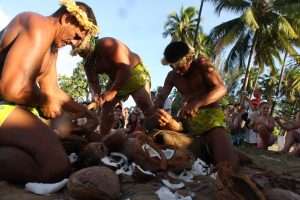 It is the last sport represented today… Candidates gather around the selected coconut trees. The principle is simple: climbing to the top of a 20m high coconut tree in a minimum of time while their feet are linked with a creeper. Bang, the competition starts! By the time I detect where these guys are they have already reached the top of the trees! Waow! What a show! 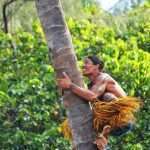 This day has been full of emotions and discoveries. The “aitos” (warriors in Tahitian) would make any sportsman jealous with their strength and will! Tomorrow will be held the Va’a races (local outriggers) and the fruits carrier race…It should be another impressive day!