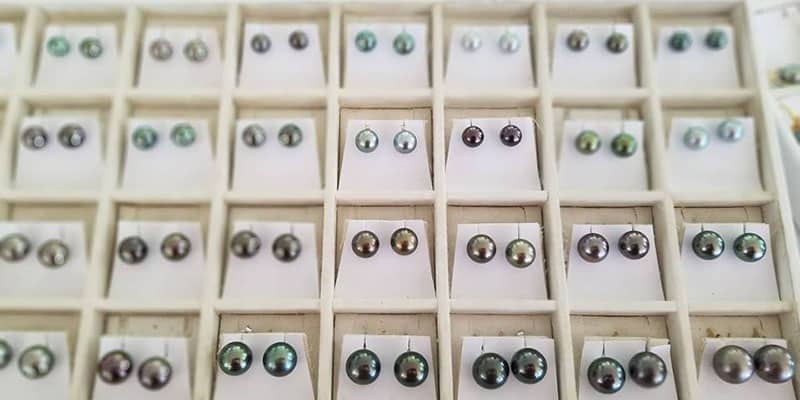 I have tested for you… the Champon pearl farm !

Located on one of the islets surrounding the gorgeous Taha’a, the Champon pearl farm is an institution, a must-see during lagoon excursions. Everyday, tens of tourists step across its threshold, eager to discover the secrets of a making process many ignore everything about. Determined to brave the storm so as to advise you better, the Moana Voyages team went there in pouring rain.  Ok, let’s admit it, it could be worse…

Initially established by Bernard and Monique Champon, the farm is nowadays partially taken over by their children Aymeric and Maeva who welcome us wearing a charming oilskin. The visit starts with a grafting demonstration, followed by explanations regarding the process and pearl grading.

If mother nature is generally doing quite well, one must admit that, sometimes, she needs a nudge… Indeed, it is believed that chances to find a natural pearl while opening an oyster come close to 1 out of 15 000.

Thus, if the black pearl is undeniably a Polynesian creation, it was two Japanese who were the instigators of pearl farming at the beginning of the 20th century. Color variations from one continent to another are due to the variety of cultured oyster used.

Open up your eyes and follow the instructions – you can try to do it at home but the odds aren’t good… In order to create a black pearl (first of all, please note that no Jack Sparrow needs to be involved), you need to pick an oyster, but not your everyday oyster : here, in Polynesia, we use the  pinctada margaritifera to carry in her womb the precious jewels which will later adorn our body.

Now that we have our surrogate mother, it is time to pick our donor : the mother-of-pearl which will give the pearl her color and intensity. In this matter, you will need a lot of patience and dexterity : gently open the oysters one after the other in order to examine its shades whith the help of a small mirror (just like a dentist…), open up little oyster ! The shades of the mother-of-pearl are likely to be found on the pearl. 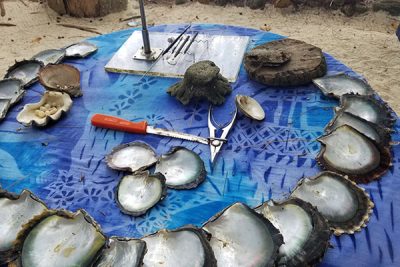 Let’s proceed to the grafting, the most crucial step. First of all, one needs to make an incision on the donor’s mantle, that is to say the organ in charge of producing the mother-of-pearl, located inside the shell. One takes small parts of it, which we call «grafts », and cautiously put in around the nucleus. Come one, you must know that, to give the pearl its round shape, it requires the most round and smooth nucleus.
And at the Champon farm, it comes from very far ! These little marbles are made out of the remodeling of landlubbers’ shells : tiny bivalves of the Mississippi river.

One gently opens up the oyster of about 1.5cm in order not to hurt it and one introduces both nucleus and graft inside the gonad, its reproductive organ. If everything goes well, cells will multiply and create a mantle around the foreign body, it is what we call the pearl pouch.

The oyster will then secrete various layers of mother-of-pearl, which will cover the nucleus and create a pearl. Afterwards, one closes the oyster and places its hinge to the top to avoid the nucleus from falling under its weight. Let Mother Nature have her way… After two or three years, after having reached the minimum size of 12cm, the oyster is taken out of water, detached from her string and stocked on a barge. 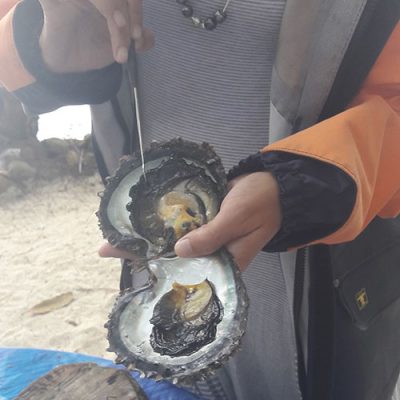 Sometimes, nature turns out to be surprising. When man intervenes by inserting both nucleus and graft inside the gonad, the oyster may reject the nucleus and keep the graft. The latter will then coat itself with several layers of mother-of-pearl and create what we call a keshi. Unlike pearls, it is exclusively made of it and, although it is not round, it happens to be highly valued. Nowadays, it is also submitted to regulation and two years are required to create a nice keshi.

As for the mabe, it is a half cultured pearl. A hemispherical nucleus is introduced beneath the mantle and glued to the shell so that the oyster will cover it with mother-of-pearl. The process then consists in cutting it out, extracting the nucleus and filling the cavity with resin.

If these little oysters turn out to be really productive, it is because they are cosseted at the farm… First of all, they are grafted during Austral winter so as not to add an additionnal stress to their routine and to guarantee a better quality of pearls.
Here, nothing is left to chance, the principle of quality before quality applies. If the minimal layer of mother-of-pearl required for exportation is about 0.8mm, they rather keep the oysters warm a little longer, in the depths of the Pacific ocean.

Besides, the farm is oriented towards sustainable development and environment preservation. Contrary to most structures, this one privileges the natural cleaning of oysters instead of the manual cleaning which may endanger environment. Everyday, small fish fuss around oysters to rid it of its parasites so that they can quietly grow.

Thus, if the Taha’a lagoon is favourable to pearl farming, it is quite limited in order not to trouble the natural ecosystem. Oysters grow up in the middle of twenty hectares and evolve in optimal conditions so that it can beneficiate from all the nutriments and oxygen it needs.

It is preferable to create an overwater pearl farm, right in the middle of the lagoon, seven or height meters deep where oysters’ quality of life is better. Indeed, around the shore, water stagnates and tends to get warmer under sunbeams, which may harm the oyster’s health and the pearl’s quality. Unlike others, the members of the Champon farm chose to dive to look after and pick up the crustaceans, instead of dredging it to the surface. 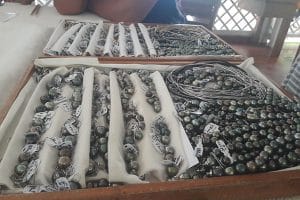 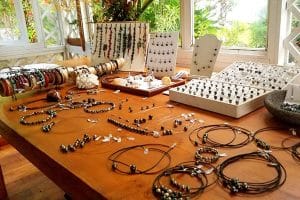 How to look after your pearl :

Delicate and fragile, the Tahitian pearl can be kept for years and passed on from generation to generation, providing that you look after it. Like every other gem, pearls do not stand the contact of chemicals, which damage its surface and tarnish its glow. Therefore, it must be kept away from deodorants, perfumes and other solvents.
If you are living in a dry region, the mother-of-pearl layers may dissociate themselves fom the nucleus, which is why it is advised to put a glass of water next to it. In a humid area, mould may develop. Everything is about balance, it is preferable to keep you pearl in a temperate place : the bathroom is a great compromise.

Eventually, do not forget to clean your pearl with a cotton cloth. 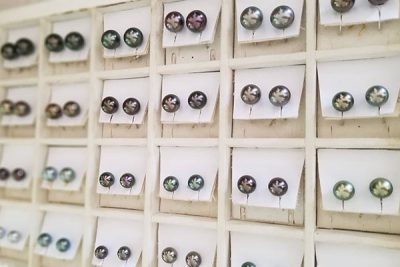 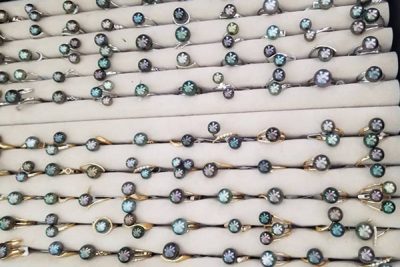 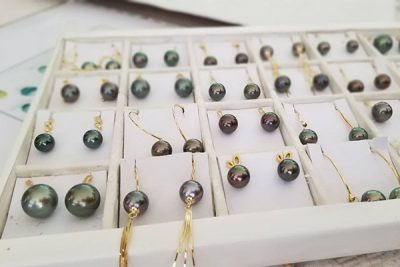 You may ask yourself what could explain the price differences between one pearl and another. In fact, even though each pearl is unique, it does respond to an official grading elaborated by the pearl farming ministry. Please note that the United States use another system (the AAA grading).

First of all, comes the quality of the pearl, its aspect and its glow.

Other criteria contribute to define the price of a pearl, such as its color and its secondary shades. Beside its diametre and weight, the pearl is classified according to its shape : whether it is round, semi-round, semi-baroque or baroque.