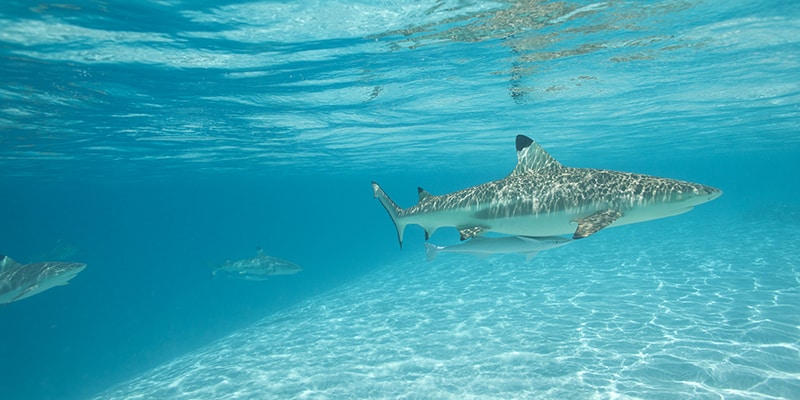 Discover the Blacktip sharks, an inhabitant of the Polynesian lagoons

This week, let’s discover a shark that inhabits the coral reefs of Polynesia, Blacktip chark, also called “Vaki” or “Ma’o Mauri” in tahitian.

Generally greyish/brownish with a white belly, blacktips sharks are present in the 5 French Polynesia archipelagos and are certainly the most common specie in our Polynesian lagoons.

Blacktips sharks live an average of 10 to 12 years and are usually a group of several dozens of sharks that can stay in the same area for several years during the female gestation period.

Quite timid and fearful, the blacktips shark is considered “less scary” than the others sharks. According to specialists, this shark is easily frightened by swimmers and can therefore be observed without worries during dives in our islands lagoons. Some excursions on Moorea, Raiatea, Tahaa or Bora Bora offers face to face meeting with those impressive animals. You will realize that even they are considered as harmless, those blacktips sharks still very scaring and impressive.

Blacktips sharks are very fast fish, they can reach up to 37 km/h but spend most of their days moving around reefs and sometimes make a little cross on the sandbank waiting for the night falls for hunting fishes. 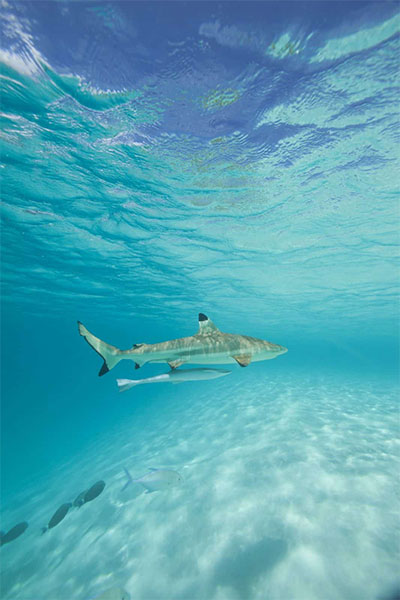 This attachment to the coasts and to the Polynesian lagoons allow him to be frequently in contact with human people and permit him to claim his harmless (If we don’t look for him to be aggressive for sure).

This link between the animal and man allow us to be less afraid of blacktips sharks and get close to them without fear. However, snorkelling fishermen still worry about those sharks because as you know, in presence of blood, a shark is out of control.

Blacktips shark has an important role in the food chain of Polynesian marine wildlife because of its significant presence on the territory, he reigns over our island’s lagoons. It is not uncommon to see them because they live at maximum 70 meters deep, this habit of living in shallow waters give him the particularity of tanning in order to protect from the sun.

Namely that a blacktips shark isn’t aggressive if he’s not provoked. 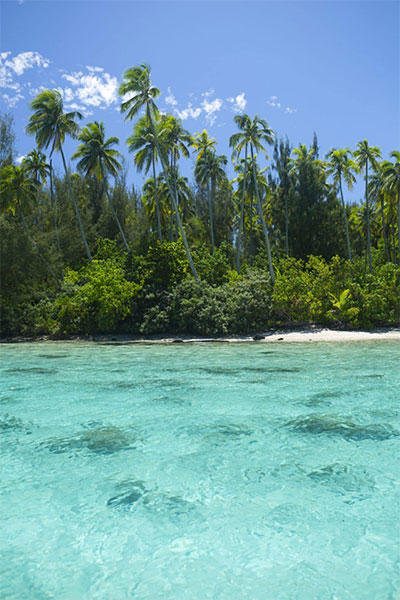 This animal feeds mainly of found wildlife in his habitat (fishes, octopuses, shrimps, mantis, birds…) that he can track with his small sensitive vesicles around his mouth that allows him to perceive electric currents emitted by human beings living nearby. This specific faculty of sharks is well developed. He can find his prey miles away, even if she’s hidden. He also uses this ability in order to orient the migrations.

During the day, blacktips sharks love to take a break in reef caves or to stroll always close to the reef and go out only during the night for hunt sleeping fishes that were hard to catch during the day. He has to be constantly moving to ensure water circulation in his gills which is necessary for his breathing.

Blacktips sharks reach sexual maturity when they reach a size between 90 cm and 1 m for males and between 96 cm and 1.12 m for females. Following mating, an embryo develops and becomes 9 months later, 2 to 5 little shark babies measuring from 30 to 50 cm (7 years and a half).

Those babies live generally in shallower waters than adults and prefer sandbanks or beaches edges that scarcely covers their body and leave exceed their black spoiler. Once fearful and rarely getting close to humans, blacktips are less shy these days, thanks to the shark feeding that had make them familiar with some places where tourists come during tours and feed sharks with raw beef or chicken for meeting them. That’s why there are lots of sharks on our beaches or sandbanks in Tahiti, Moorea, Bora Bora… during high tide days. 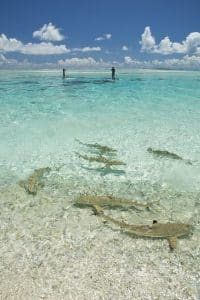 In French Polynesia, black tips shark’s mating is usually from November to March off shore to Moorea. According to scientific research, older females would have precise and fixed mating and reproducing period every year. While youth ones aren’t this precise and are less well synchronized. They can mate just after had calved.

Shark’s gestation period depends on his localization: In the Pacific, sharks’ gestation last around 10 to 11 months.

The shark is omnipresent in Polynesian culture and is in a lot of legends on our islands:

At Bora Bora, “Heitarauri”, a young boy left by his parents because he didn’t look like humans when he was born. He has been found by two sharks who thought about eat him once he will be tall enough. One day, this young boy came back to the top and met another young boy from Tuamotu islands, “Pehu” who invited him on his island: “Marutea”.

The whole Marutea’s population and their queen were waiting impatiently for Heitarauri’s arrival. They saw an enormous wave where there was a man standing on a shark’s back. Pehu screamed “It’s my friend!”

The big shark stopped not far from the beach and then Heitarauri went down and told to his father “Tomorrow, you will come and take me at the last hour of the sun, when he will give us his last sun shine, we’ll go back to our island”. The gigantic shark sank in the blue and disappear.

The queen wanted to charm Heitarauri and had built a hut for her and the beautiful Heitarauri, a feast was organized for him… There were lots of food, they ate, they drank, they danced… But Heitarauri understood queen’s ambitions and imagined a trick for dodging a relation with the queen and asked to his friend Pehu to go in the hut for him. When the queen saw that Heitarauri had gone from the feast, she went directly to the hut, thinking that he was inside. So, she approaches from Pehu who took her for being his wife. 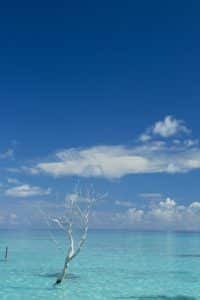 According to the “Maohi” culture, the queen had to marry with the man that she knew, so she had been married with Pehu and so Heitarauri was able to go back home on his father’s back once the sun was down. He took a branch of Miki Miki for remembering Marutea and planted it on Faanui’s beach in Bora Bora.

Since this, this tree was the first Miki Miki tree planted in Bora Bora.

There are many others legends on sharks that are part of the large historic and cultural patrimony of French Polynesia. You will discover it with our specialists guides during tour on our islands.

Like mostly of those sharks species that stills alive today, blacktips shark is on his way to become an endangered specie because he’s overfished (for his meat, his fins or even his liver oil). He’s also threated by predators that are more and more in our water (Big white sharks, lemon sharks, tiger sharks…). There are also people who fish them just to reduce numbers of sharks on their islands without realizing that this specie is going to disappear because there are more died sharks than born sharks. 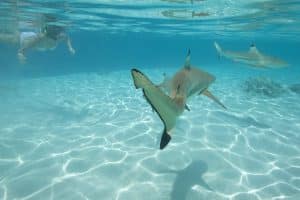