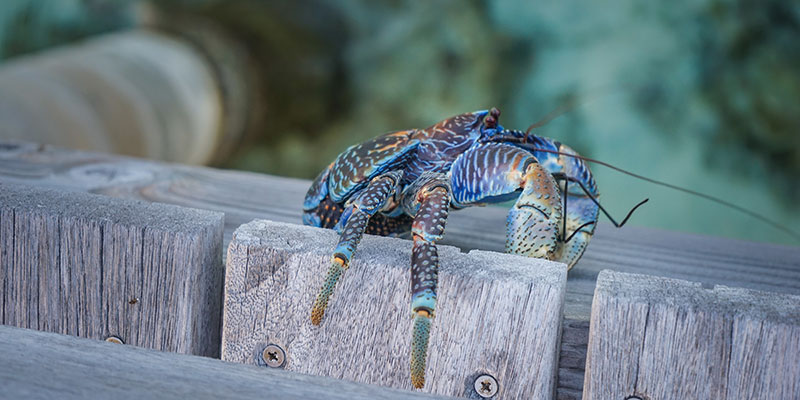 Moana Voyages offers you to encounter an incredible and really tasty crustacean , the coconut crab!

The coconut crabs or “Kaveu”in Tahitian, also known as “robber crabs” are the biggest terrestrial arthropod in the world! Adults of this species weigh up to 4 kg and size up to 1.3 ft. But some people say that they had observed specimens weighing more than 17 kg!
It is a cousin with the hermit crabs. We recognize it thanks to its singular appearance, the Kaveu has red eyes, and the colour of its shell varies between blue-purple to orange-red.  It has the particularity, at adulthood,  of living in sandy areas next to coconut trees, indeed, its respiratory system does not allow it to survive in the sea.  It feeds  at night almost exclusively of coconuts  that it easily opens with its powerful pincers, he likes eating bananas, and Pandanus fruits also .
With its high yield sense of smell, this crab can detect food from far away and no hesitate to introduce them in houses to satisfy  its appetite! 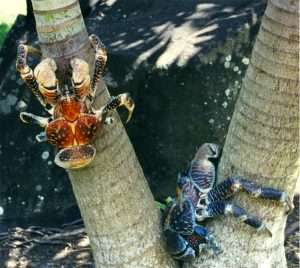 The coconut crabs, very much appreciated by Polynesians, are principally consumed in the Tuamotu archipelago where it is an important food resource.  We eat the legs and claws and also eggs and grease of the abdomen, which are considered as prime pieces! Coconut crabs can be cooked as a lobster, boiled in water or cooked in coconut milk… There are a wide variety of recipes.

If this article gives you mouth-watering and If you are interested in trying this outstanding dish; contact us and come to the discovery  of the Tuamotu archipelago, the Mecca  of divers  and fishers ! 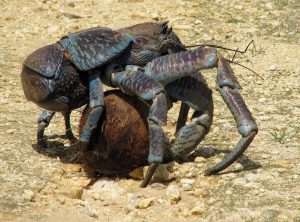