How much is a Trip to Bora Bora?

Webcam of Tahiti and Moorea

Agenda of the year

Communication in the islands of Tahiti

Where is Bora Bora? 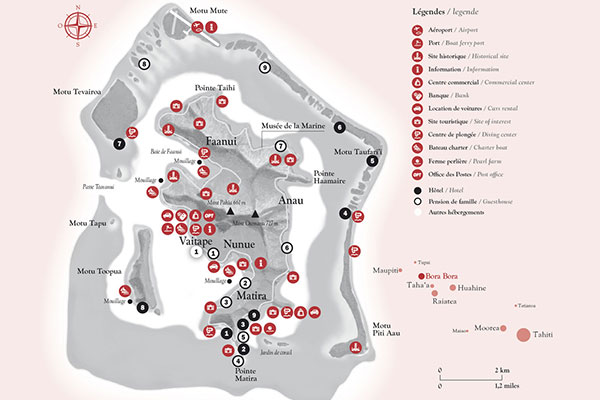 6 153 miles away from Washington, in the middle of the Society archipelago, is a hidden jewel: Bora Bora, the Pearl of the Pacific ocean. Famous for its lush nature and blue lagoon, this tiny island has just a surface area of 24 mi²: 5 mi long and 3 mi large. Small in size but great in fame. Called “Mai te pora”, the island created by Gods, Bora Bora only counts 10 600 inhabitants but enjoys a tremendous success worldwide.

Located 158 miles to the Northwest of Tahiti, Pora Pora, as it used to be referred to, is the “first born”. Created from a former volcano, the island is made of a basaltic range which offers an impressive landscape. The Mont Otemanu, its highest peak, is about 727m high. It overlooks the ocean and makes Bora Bora look like the perfect postcard everyone thinks about when speaking of Polynesia.

Made of several motu, these islets spread over the lagoon, Bora Bora is protected from the swell thanks to the coral reef. Everyday, dozens of cargos cross the Teavanui pass, the only opening over the ocean, to supply both shops and resorts with goods.
Nowadays, most of the islets have been bought by well-known hotel chains but some of them remain accessible for excursions. The most famous are probably the Tapu motu, the Tevairoa motu, the Mute motu, the Tane motu or even the Toopua one, to mention but a few.

Besides, the island of Bora Bora counts three bays: the Faanui bay to the Northwest, the Povai Bay – also called the Tuuraapuo Bay – to the South-East and the Hitiaa bay to the North-East.

The History of Bora Bora

If Bora Bora is so prized, it is partly due to its historical heritage. The island indeed used to be the American supply outpost during World War II. Intended to supply the South Pacific fleet, the island was equipped with an oil warehouse, a landing runway, a seaplane base and cannons.

When the war was over, soldiers left the island and kept the memories of a wild and isolated Eden with them. Their stories contributed to the current myth surrounding this small piece of land. And now, even though only a few can place the island on a world map, many have heard about it.
Beside tourists, Bora Bora is particularly appreciated by locals, mainly because it is easily accessible.

Located 12,4 miles to the North-West of Taha’a and 32 miles away from the no less interesting Maupiti, Bora Bora is daily served by public transport within the Raromatai islands and enjoys a great air service.

How to get to Bora Bora

How long is the flight to Bora Bora ?

International flights used to land in Bora Bora, nowadays if you want to go there, it is necessary to take off from the Tahiti-Faa’a airport. Every day, 50min direct flights lead you there, count about 1h30 if there is a stopover.

The Bora Bora airport is located on an islet which turns out to be a few minutes away from the main island: “Motu Mute”. From there, a boat shuttle drives you to the hotel of your choice or to the Vaitape port.

If you are not into air transport, you can jump in a boat departing from Raiatea for instance and take some time to gaze at the lagoon.

Back to top
We are using cookies to provide statistics that help us give you the best experience of our site. By continuing to use the site , you are agreeing to our use of cookies. Ok