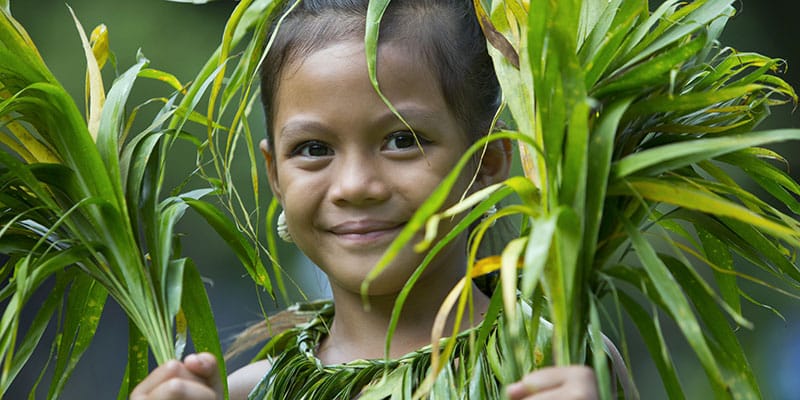 The Place of the Auti in Polynesian Tradition

Growing buds here and there, flourishing by the road, its leaves spreading all over the place, creating a nice tropical Daedalus around each fare, the auti is indisputably the star of the islands of Tahiti. Displayed in a prominent position before the threshold of our houses, it holds a special place in our hearts.

Some call it palm lily, ti plant, Cordyline fruticosa, cabbage palm or even good luck plant and give it an ornamental role but here, in Polynesia, we worship it! It grows e-very-where and yet, as soon as you hear the crowd clapping to the beat of the to’ere on To’ata, consider it is already gone. Yep, you did see a mauve auti on this traffic circle yesterday, it is what we call the Heiva1 effect…

The Origins of the Auti

The evergreen plant proliferates in our Polynesian islands so much that we tend to forget that it comes from China. Introduced for the first time to European greenhouses by Benjamin Torin in 1771, it is now to be found under 13 varieties, from the Marquesas to the Samoa islands.
Called karokaro in Fiji, it is generally referred to as ti within the Polynesian triangle. In the Society archipelago, we even distinguish the roots, ti, from the auti, which defines the whole shrub.

It certainly grows timidly at first but don’t be fooled by its frail trunk, the auti can go up to five meters high. Unlike most island plants, it is not famous for its fruits but for its leaves, which can turn green, yellow or pink, depending on the variety. 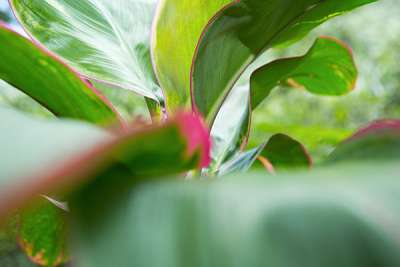 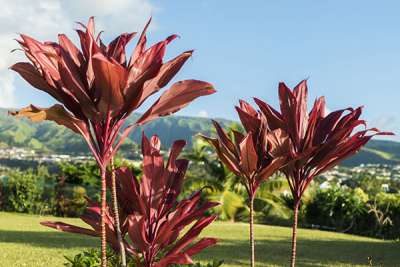 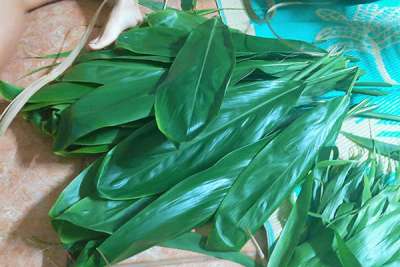 If the auti is so popular in Polynesia, it is because it quickly adapted to the local way of life: a small border, sunbeams and a lot of love make it thrive. Pacific islanders appreciate this ease of care, all you have to do is take cuttings and there you go. After one year, the plant can withstand the strongest mara’amu, heat and cold, sea salt and even inopportune crab attacks and, believe me, not every species can boast about it…

Legend has it that it was the god Taaroa who first gave the plant to Polynesian people to help them survive during dry season thanks to its sugar-filled roots.

Now you may know how much we love uru and taro here but, believe it or not, people used to prefer ti. In the 1920s, the market of Papeete was studded with these little cubed tubers, streamed in the ahima’a until dawn… Children hastened to taste the delicacies while the elderly used it to sweeten their tea. We used to dig up big roots, some could weigh up to 90 pounds, and let it simmer. Nowadays, the ti is mostly served on special occasions, like weddings or religious feasts. The average 20h of slow cooking were not compatible with our renowned indolence.

In Tubuai, however, tradition is carried on. Roots are namely used in the making of the popoi, mixing it with taro is said to make the whole mixture sweetener. In Rapa, people leave to infuse the raw roots into boiling water and use the decoction to sweeten their meals.

It is definitely the arrival of the European sailors at the end of the 18th century that gave the tuber an utterly different use. When they wanted to get drunk, the Maohi were used to chewing the root of the ‘ava2 raw but the whalers imported a few unknown fermentation techniques. The islanders then tried to ferment pretty much everything they could find: oranges, pineapples, fara, fei… Until they realized the auti presented the advantage of growing quickly and easily. And this is how the ti went from the pot to the still! 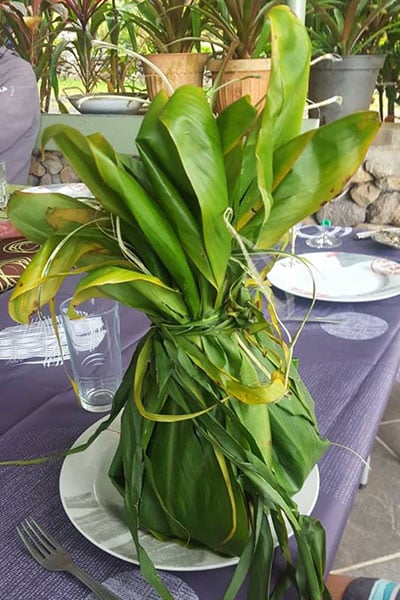 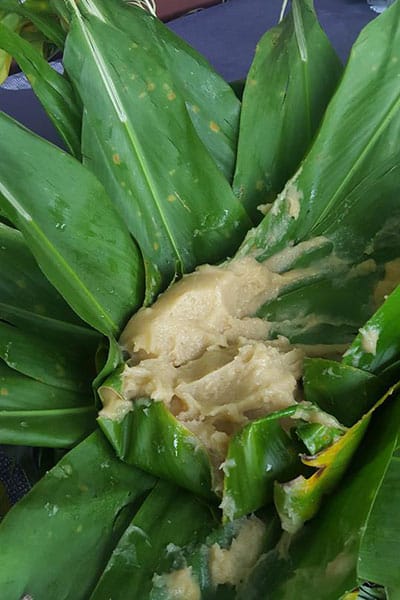 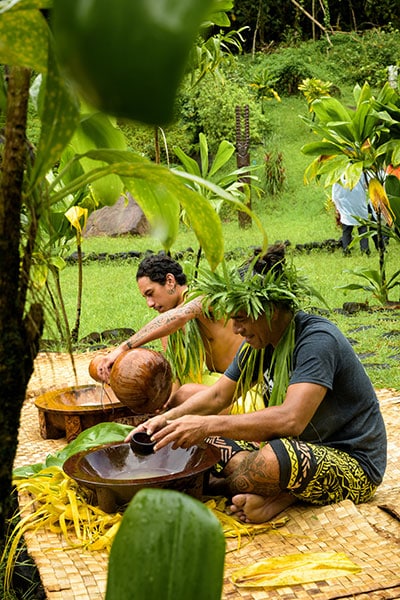 The Ra’au Tahiti, medicinal Properties of the Auti

Being really spiritual, Polynesian people used to attribute a supernatural origin to illness. Violating a tapu3, committing a crime or provoking the wrath of your enemies was said to arouse the ire of gods, which only incantations, prayers, and offerings could appease. The auti was then supposed to calm down the gods and help humanity succeed in whatever they undertook. Now you may understand why there are so many auti plants on marae…

Even nowadays, it remains a big part of traditional medicine.

If you are searching to cure an otitis or an otalgia, ask our matahiapo4 to prepare a ra’au tari’a: 2 handfuls of anuhe leaves, a young stem of auti, 6 mōu’u, a bit of sandalwood oil and there you go… Inhale and put it over the edges of your ears and the top of your head and you will feel better.

If you want to remove an abscess, you should extract the juice of 10 young plants of auti and add 10 tiare buds, mix it all and spread it over your skin.
Is there really anything better than a grandma remedy? 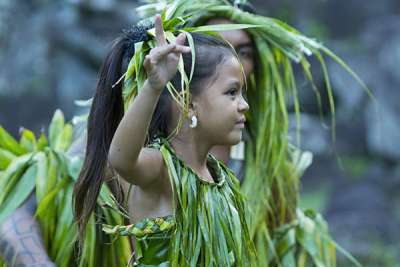 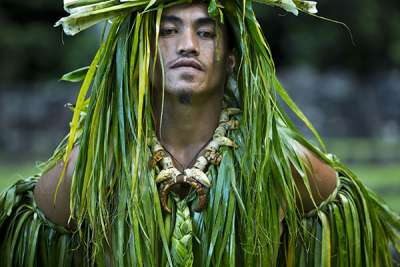 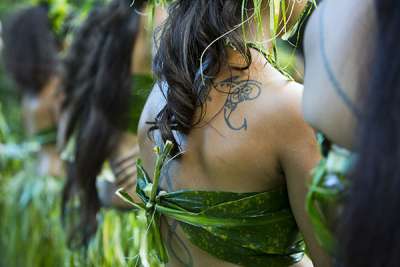 The Auti in Popular Culture

One should never underestimate the power of the auti. During the first migrations within the Polynesian triangle, it was kind of a must-have, something you always carry in your outrigger canoe… Sailors would never weigh anchor without bringing some plants to make sure to go under favorable auspices. Once they set foot on the ground, the priests would directly plant the auti to thank Maui for keeping them safe.

As for the rauti, they were great orators, chosen for their boldness and ability to speak to an audience. They wore nothing but a holy ti belt, the Ti’iti, and were supposed to heap insults upon enemies and cheer the troops at war. The auti then played a great role, not only did it help to recognize the rauti, but it was also used as a white flag. When mediators wanted to put an end to the war, they came with a bunch of auti, asking to stop the fighting. 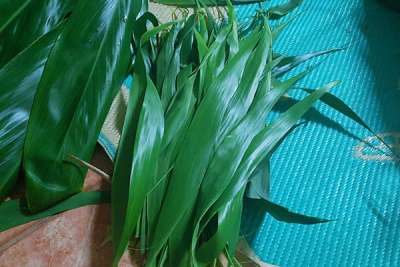 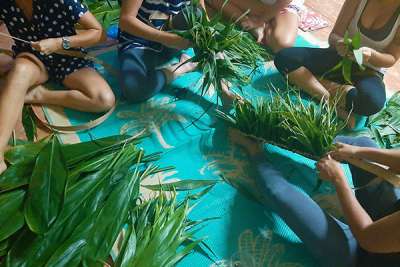 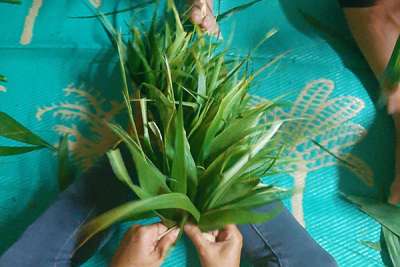 Over the years, the auti lost its distinctive character, however it remains one of the main attributes of professional dancers. You must know something, behind every pruned shrub is an all dressed up dancer… Machete, scissors, shears, choose your weapon, the auti hunt is open all year long but faces an activity peak in July.

Whether you want to create a tapea titi, a belt, some rope, a skirt or a crown, the auti is definitely the most prized plant of the Heiva I Tahiti. Easy to find, easy to plant, to pick and to braid, it is the best ally a dancer could find a couple of days before the show. With its emerald color, it emphasizes tanned bodies and underlines jerky moves.

Ra’au, ornamental plant, Friday night crown, the auti is inextricably linked to our daily life. From the horticulturist to the priest, the dancer, the master of ceremonies or just party people, each and every person in Polynesia gives it a predominant role.