From the depths of the Pacific came Raiatea, the sacred. Overlooking the oceans with its 1,017m, Mount Tefatoaiti breaks the horizon with its steep terrain.

Not far away, on the Temehani plateau, hides a little wonder of nature, a little miracle, as there are few. In the middle of the lush vegetation, hides the Tiare Apetahi, an endemic species that won’t grow anywhere else. Unlike its Polynesian sister, it has only five petals in half-corolla that form a hand. Refined, delicate and with an amazing smell, this little flower is the emblem of the sacred island. 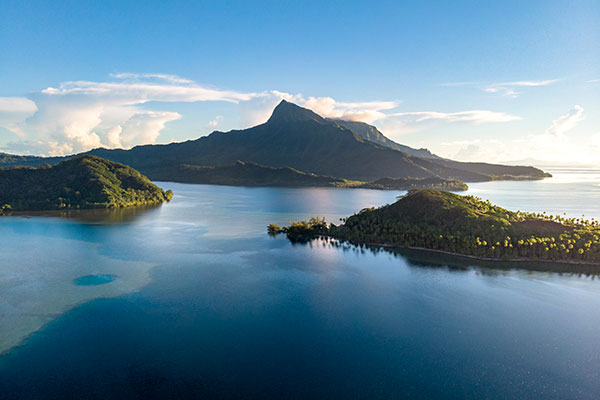 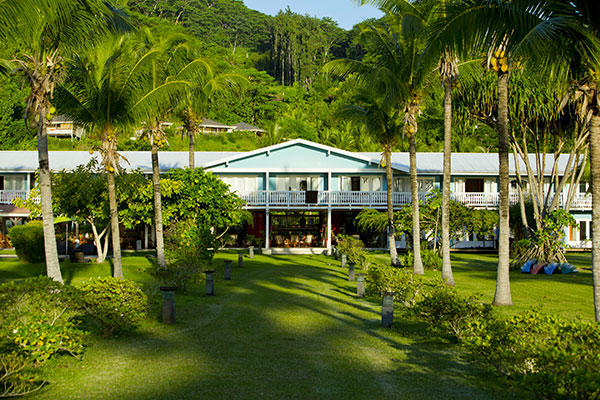 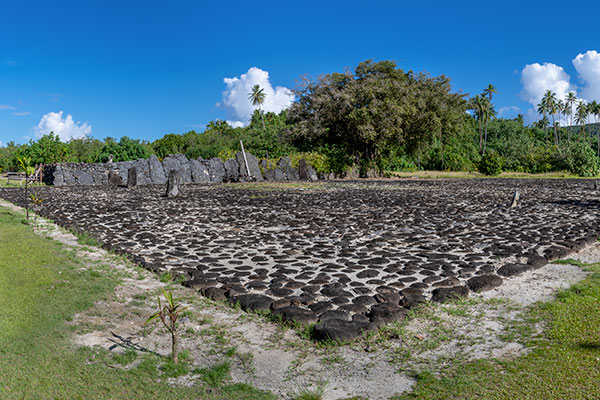 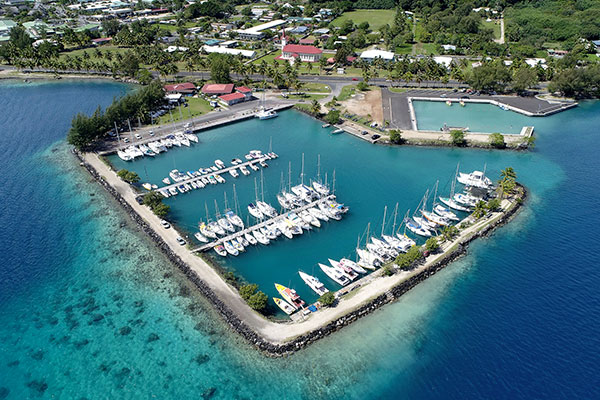 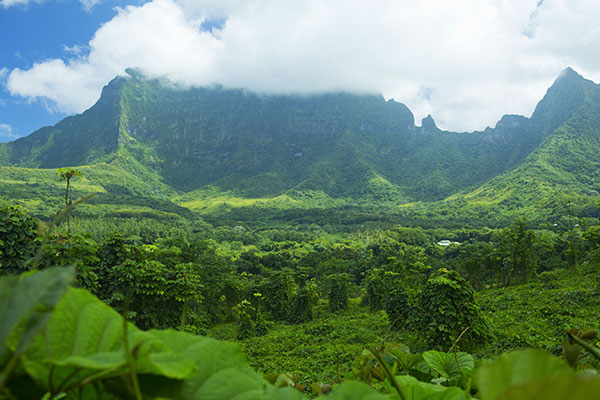 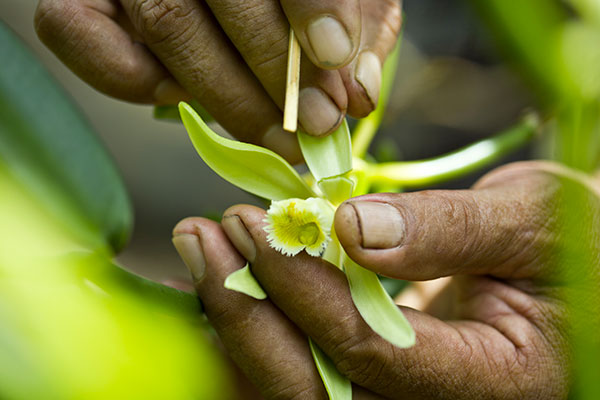 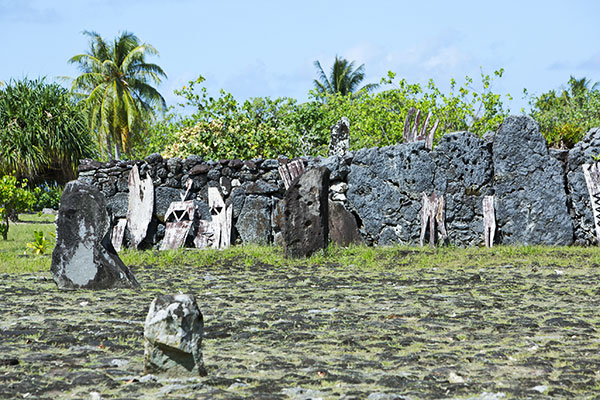 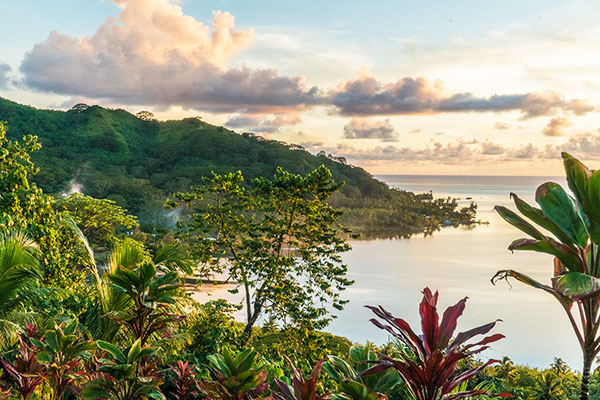 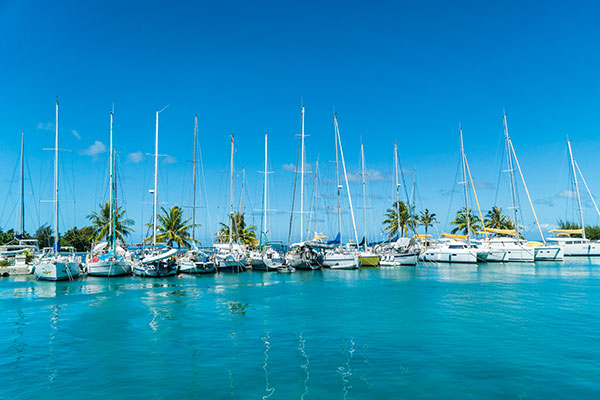 Located 210km northwest of Tahiti, Raiatea is the largest of the Leeward Islands. Dear in the heart of the Polynesians, the island has a certain magic connotation. Former cultural and religious center of Eastern Polynesia, it is must-see island.

First island populated by the Polynesians, Raiatea claims to be the epicenter of the migratory flow to the triangle. True cradle of the maohi culture, it remains the second economic pole of French Polynesia.

According to the legend, the priests set out to build a new marae, making sure to uphold the custom that no one should speak or move during construction. Terehe, a descendant of the royal family disobeyed and went for a swim in the river. Wrathful, the gods awoke an enormous eel from the depths that swallowed the girl. The beast, having trouble digesting, stirred and eventually devoured the heart of the island, splitting it into two separate parts. This is how Taha’a and Raiatea were born.

Geology has since proved that they initially formed just one island several million years ago. Today, the two islands share a history, a heritage and a lagoon.

Our packages in Raiatea

Call of the Sea and Polynesian lagoons

Do you hear the call from the sea? The ocean is waiting for you. Why don't you discover the Society archipelago aboard a catamaran?

If Raiatea does not have many beaches of white sand, it can nevertheless count on its green mountains and its lush vegetation. The heart of the island allows superb hiking, horse riding, quad biking and 4WD tours.

Accessible in about 4 hours, Mount Temehani is probably the most famous. It offers an incomparable panoramic view from its belvedere. Your efforts will be rewarded throughout the course by short breaks at the three waterfalls.

Mount Tapioi requires a little less practice. The path is between the gendarmerie and the Uturoa post office and the hike can be done in just under 45min.

Another specificity of Raiatea: its seawater pool. If this site is not extraordinary, its history is somewhat unusual … A few centimeters from the shore, the authorities have undertaken to build a municipal pool but, due to a manufacturing defect, the wall collapsed and the pool is now fully open to the ocean. The ladder and the facility are still there and the students are still taking their swimming lessons…

The “Tahiti black pearl” is undoubtedly the favorite souvenir for all the travelers coming from all over the world. To offer or to indulge yourself, this exceptional gift will be the image of your trip, unalterable. The pearls farm allows you not only to discover how these little jewels of nature are created but also to do some shopping at low cost: mounted or sold naked, pearls are indeed zero-rated here unlike those found in large shops in the capital. If you wish to know more, do not hesitate to read our article on pearl farms.

Although it is not as colorful and animated as the one of Papeete, it is nonetheless a must. Mix with people, smell the fragrance of flowers, contemplate this festival of colors and leave with some local specialties.

Fish, fish, fish … look at this fauna that moves under the surface of the water. Marine caves, coral gardens and passes where a universe parallel to ours evolves.

If you want to see more, dozens of dive sites are waiting for you. Within the lagoon, 18m deep, is the wreck of the Danish three masts ship “Nordby” which sank in 1900.

Laying in the Sun

We have to agree, Raiatea does not really have beaches of pristine white sand. On the other hand, the island counts several public motu (islets) within its lagoon. These little islets, arranged like a pearl necklace around the lagoon, will allow you to enjoy an idyllic setting. Here, nature takes over, only the birds and the waves lapping the shore break the silence. Willing to satisfy travelers, the authorities have also chosen to install on-site facilities dedicated to your well-being. Therefore, tables, showers and toilets are at your disposal to make this Robinson’s life more pleasant.

Heading up the River

Raiatea is the only island in Polynesia to have a navigable river, the Faaroa. Bordered by lush vegetation and great nature, it offers a pleasant ride for anyone who would aspire to calm. And for those who prefer to stay on dry land, all you have to do is wander through the botanical garden.

Slide on the Ocean

Now that you are in Polynesia, it would be a shame not to take advantage of the natural resources available to you. The ocean and wind combine to offer quality activities: surfing, fly surfing, kite surfing or windsurfing, all options are possible.

And for the less reckless, there is always kayaking!

Cruise on a Catamaran

High place of sailing, Raiatea enjoys optimal sailing conditions. Its large nautical base allows a large number of sailboats, yachts and catamarans to discover the bay and sail between the islands of Taha’a, Bora Bora and Huahine.

From small leisure boats to luxury yachts, there is no doubt that you will find the perfect match…

Whether you are a novice fisherman or a true passionate, we offer an exceptional fishing session! Hatch some rare specimens of Polynesia (pai’here, mahi mahi, haura, jacks and other mackerel), stay focused on the target but do not forget to contemplate the scenery…

The captain will teach you traditional and modern fishing techniques. If you thought fishing was boring, please think again! Catch your fish and don’t forget to take a photo!

Testimonies of the past greatness of the Maohi people, the marae are the main inheritance of Polynesians. They attest to the importance formerly granted to the spiritual. Famous throughout the Pacific area, the marae Taputapuatea is undoubtedly the most important of them. Originally dedicated to the god Oro, it has today become a high place of pilgrimage. Indeed, many Polynesians come there from the whole triangle. Rumor has it, Raiatea was the starting point for migrations to Hawaii, New Zealand or Rapa Nui. Each sailor would have taken with him a stone from this marae to build a new one once arrived at his destination. Former heart of the religious and political power of Polynesia, the site was used for investitures and official meetings. It is now a UNESCO World Heritage Site.

Excursions and activities in Raiatea 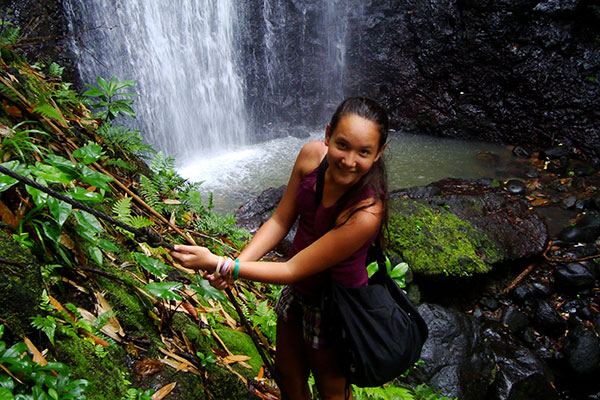 Walk through the heart of Raiatea and discover bamboo forests and 3 waterfalls along your route. 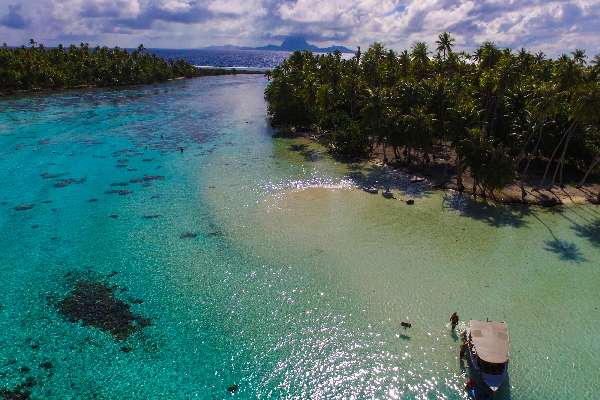 Enjoy an exotique and unique getaway in the stunning ‘vanilla island’: Taha’a. 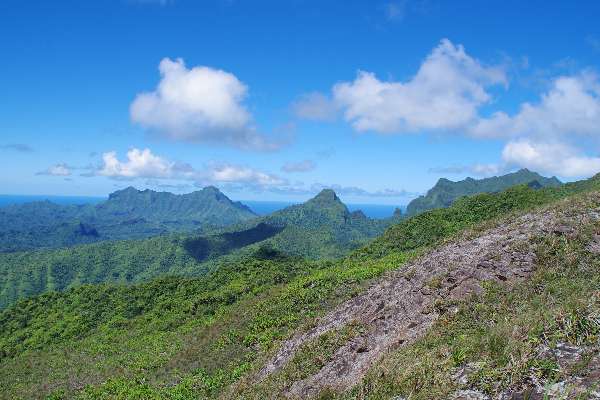 Enjoy a challenging hike in Raiatea, up to the rocky plateau of Temehani, located in the heart of the island. 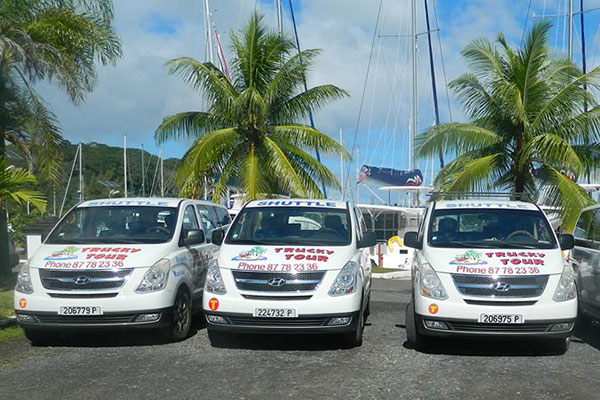 Embark on a mini-van for a circle island tour and visit the famous sites of the mythic island !

No famous hotel has been established on the island, however it has some charming lodges classified 3 tiare. Good compromise between the hotel and the guesthouse, this type of accommodation gives you the opportunity to meet the locals, discover a new way of life, and taste homemade dishes while getting to know their hosts. Driftwood, fine dining, swimming pool, plunging views over the bay, the service extends well beyond the comfort and sense of hospitality.
Tama’a!  It’s time to eat:

Once again, you will have no difficulty finding a charming table to enjoy a nice meal. The center of Uturoa has many small snacks that will satisfy most of the appetites and several convenience stores where you can do your grocery shopping. Day trips also include a meal and a snack, but for dinner, we recommend that you trust your host and book your stay half-board. 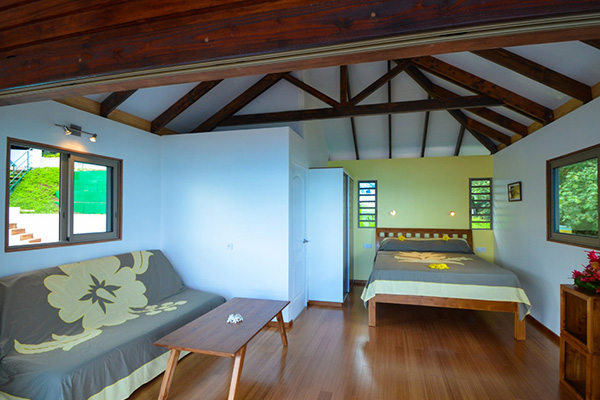 Nestled on the heights near Uturoa's city center, Villa Tonoï offers breathtaking views of the lagoon and its beautiful shades of blue and green. 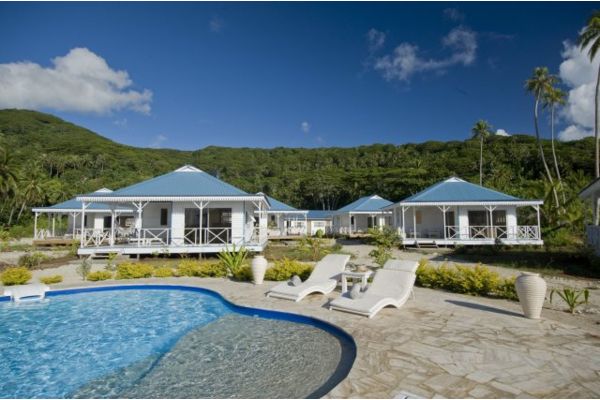 Surrounded by a stunning panorama, Opoa beach offers its visitors a pleasant stay and an invigorating change of scene. 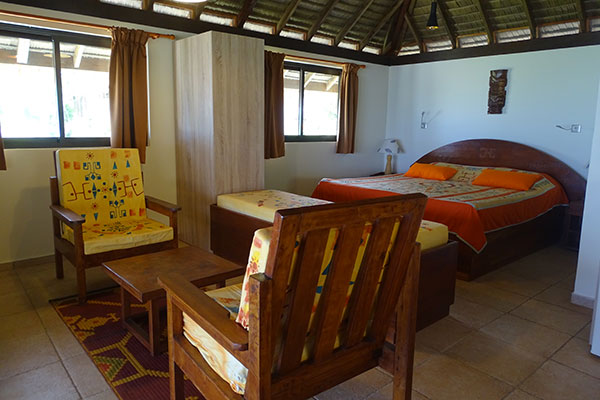 Located on a beach in a lovely environment, this small family hotel is very charming.

It is not a small Tuamotu atoll but it is not Tahiti either. To go around Raiatea, you have to rent a car, a scooter or a quad. The bike seems a bit ambitious to perform the 99km that separate you from the finish line … If you feel lucky, you can try to hitch a ride, the locals are famous for their kindness.

First, you need to fly to Tahiti, and then you just have to book a flight Tahiti – Raiatea via the local airline Air Tahiti. In just 45min, you will have arrived at your destination, just the time to drink a fruit juice in the air.

The island is served daily by air and two to three times a week by sea. However, you will need twelve hours of sailing if you chose this last option. If you are a sailor, the Hawaiki Nui is however a quite pleasant solution.

Like the other islands in the Society archipelago, the climate is tropical and divided into two seasons: a warm season with rainfalls here and there from November to March, and a relatively cooler season with daily sunshine, from April to October. We would advise you to choose a departure during the austral winter, when the temperatures are more bearable, the climate less humid and the weather sunny.

Formerly, the island was named Havai’i Nui. It is home to Faaroa, the only navigable river in French Polynesia.

The Tiare Apetahi is a unique flower that grows only at the top of Mount Temehani. Despite the great efforts of some people, the flower could not be introduced anywhere else in the world and is now considered an endangered species.

With its 238 km², Raiatea is the fourth largest island in French Polynesia, after Tahiti, Nuku Hiva and Hiva Oa.