Sister Island of Tahiti, Moorea is only 17km away from its big sister. Less than an hour by ferry, its accessibility makes it even more attractive.
Once there, it is hard to resist its simplicity and authentic charm…
This butterfly-shaped island with outspread wings will captivate you and you will immediately feel immersed in a cocoon of well-being. 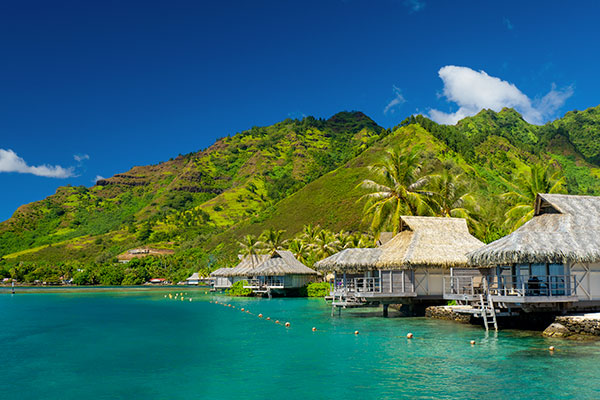 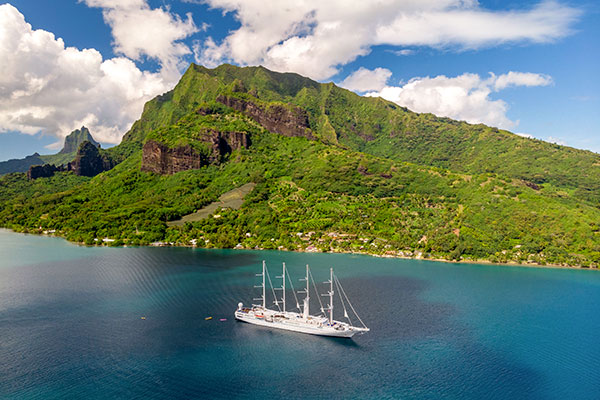 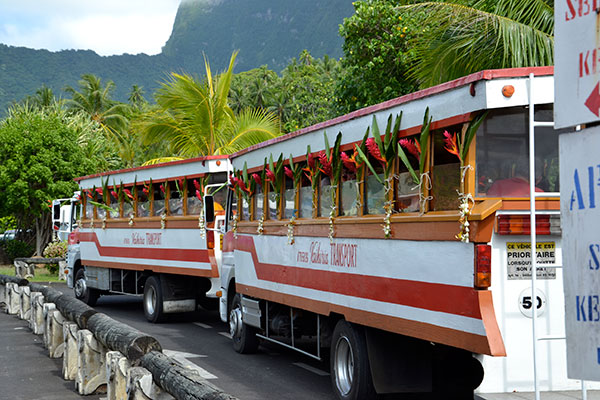 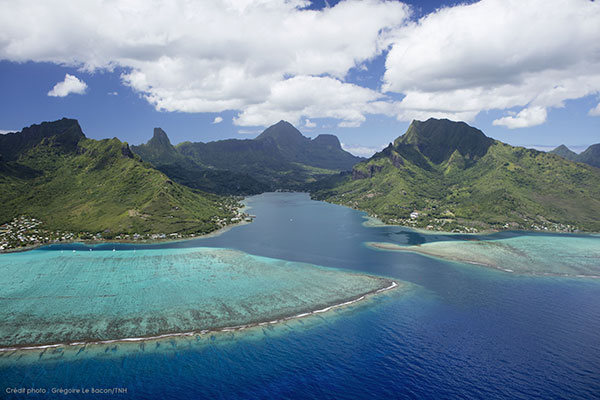 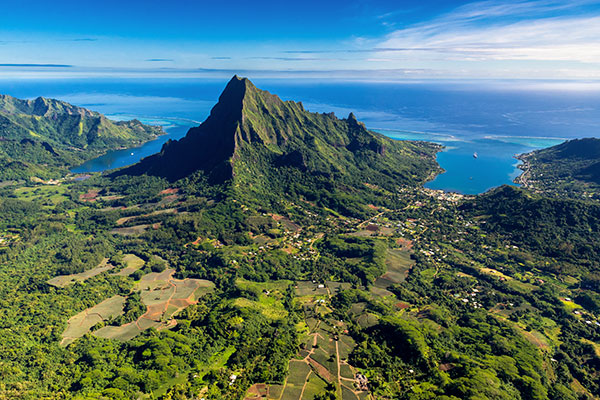 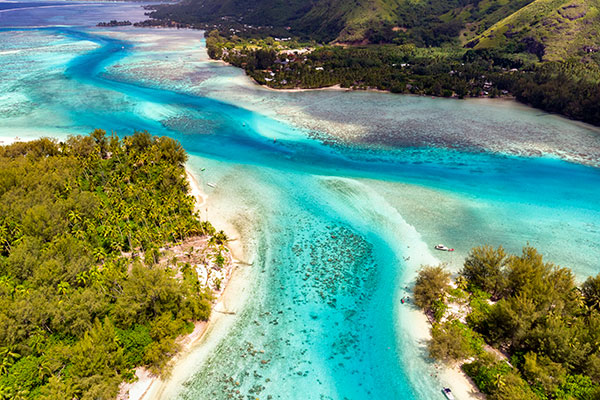 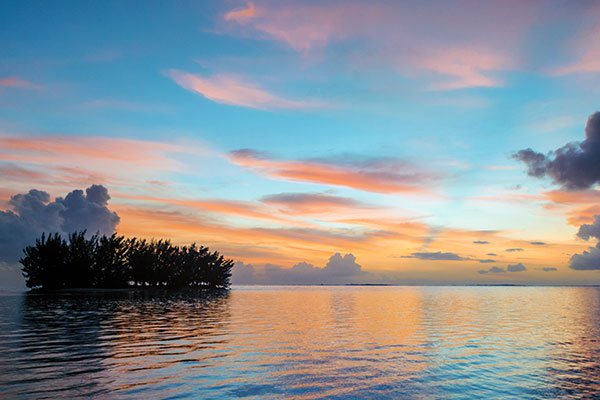 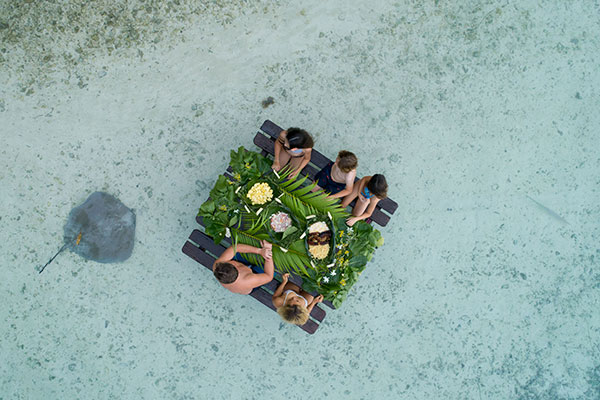 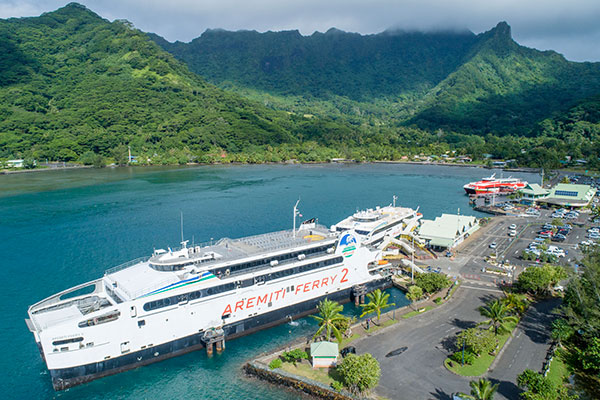 With its 16,000 inhabitants, it is the second most populated island of Polynesia. Many locals have chosen to live there while continuing to work in Tahiti, preferring its tranquility to the bustle of Tahiti.

Entirely surrounded by a lagoon with magnificent waters, it has everything if not more than its big sister. An impressive relief, majestic bays and sandy beaches make it a wonderful island. No wonder it is the third most visited island in Polynesia after Tahiti and Bora Bora.

While tourism is obviously one of the pillars of its economy, this island has diversified thanks to its Rotui fruit juice factory, which is a major player in the local activity. It is also thanks to this that we find so many pineapple fields on the island making it the first pineapple plantation of Polynesia.

Discovered at the same time as Tahiti, they share the same history. However, it was only in 1777 that Captain Cook first visited it and anchored in one of its bays. He was the first Westerner to officially put Moorea on a map, this is why his name was given to one of the most beautiful bays in the world, the Cook’s Bay. It remains today a privileged refuge of the numerous boats visiting its lagoon.

“Moo” meaning Lizard in Tahitian and “Rea” meaning Yellow, the island of the Yellow lizard owes its current name to a legend counting a huge golden lizard that would have swum from the small neighboring island, Maiao. Exhausted and struggling against the currents, it would have turned into an island to become what we know today.

Our packages in Moorea 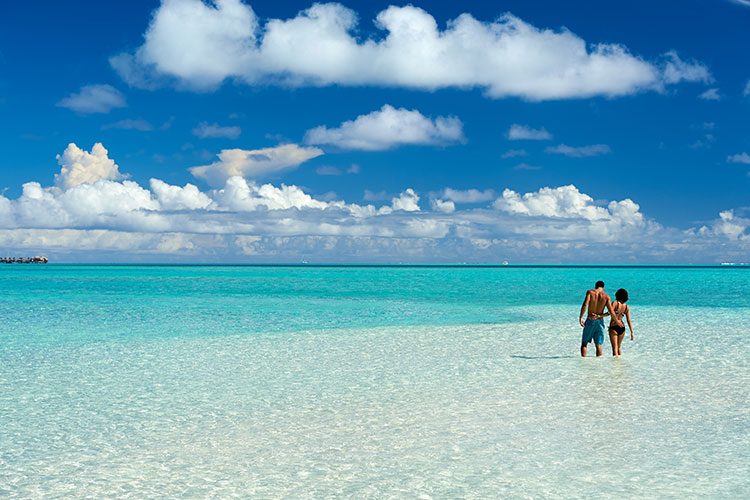 Would you rather stay a garden pool bungalow in Moorea or try the overwater villa of Bora Bora? Luxury takes a whole other meaning in Polynesia! 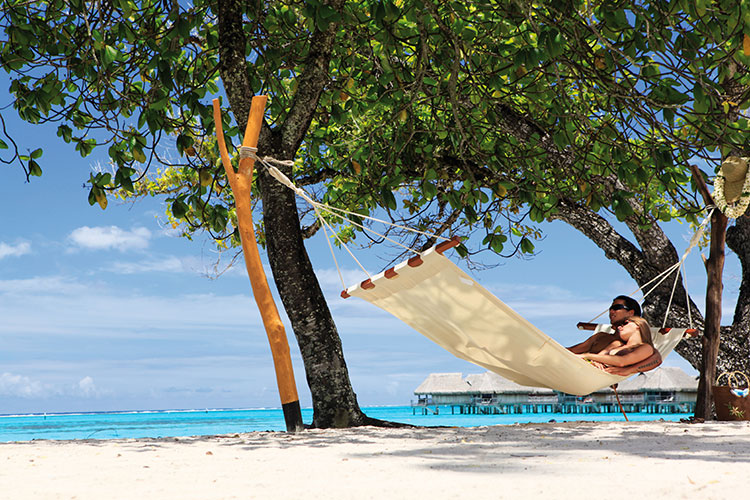 Close your eyes and picture yourself nestled in a 4-star resort, far away from the daily pressure. Here you are, the Sofitel Kia Ora Moorea Beach Resort! 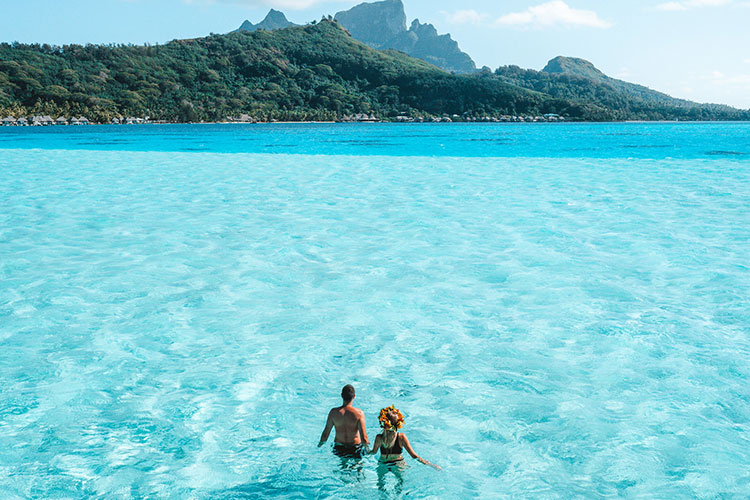 3 iconic islands, 3 prestigious hotels… Both Sofitel and Intercontinental resorts will enable you to embrace the Polynesian spirit while indulging yourself.

Some people see the shape of butterfly; others better like to see a heart. One thing is sure, whether you arrive in Moorea by the sea or by the airs, you will be immediately seized by this mountainous panorama. If Mount Toheia is the highest, Mount Mou’a Puta is the most famous. With a hole in its summit that earned it the nickname of the breakthrough mountain, it is a curiosity that attracts the eyes of tourists. The legend has it that it was the Tahitian hero named Pai who threw his spear from Punaauia in Tahiti to Moorea to prevent Hiro from robing Mount Rotui. His spear would have pierced Mount Mou’a Puta to finish its route to Raiatea.

If there is a mandatory stopover during your stay, it is the Belvedere. Accessible by a small road, you will drive through the lush vegetation to find yourself in the middle of the crater, 240m above sea level. There, you will face one of the most beautiful panoramas of Polynesia. Overlooking the two majestic bays, you can admire all around you the mountain peaks that make the reputation of the island. Eight mountain ranges radiate from this site and it will be difficult to leave this magical place without feeling humble and privileged.

Dividing the island in two and separated by the famous Mount Rotui, the Cook’s Bay and the Bay of Opunohu are incomparable beauties.  One kilometer wide and penetrating up to three kilometers inland, it is easy to see why it has been an outstanding shelter for all boats for centuries. Surrounded by sharp mountains, a mystical atmosphere emerges from these marine refuges.

It is difficult to come to Moorea without passing by a pineapple field. Thanks to the Rotui fruit juice factory, this is an activity that has made the island pineapple famous. You will find them as far as the eye can see but do not go too close to the thorny leaves of this delicious fruit as they can scratch you.

You can also take the opportunity to stop at the Agricultural High School of the island that trains future farmers in the region. You will taste fresh juices and jams, all made from local fruits.

With a beautiful lagoon it would be a shame not to go and admire it more closely. Locals offer this type of activity and they are numerous on the island. You can also opt for canoe rental if you are a little sportier.

From August to October you can also choose a guided boat trip to observe the whales! As Moorea is one of their favorite havens, you may be lucky enough to be able to meet the majesty of the oceans…

With its eight mountain ranges, the island offer beautiful hikes. However, you will have to be a hiking expert because the paths are not very well marked. Do not forget that we are in the tropics and therefore the sun is very unforgiving, so leave at dawn to avoid suffering from too much heat. You can go on some tracks alone or opt for the company a guide. You will be able to follow him without having to worry about the path and listen to the information he will share with you.

Located in the Opunohu Valley, the rope park welcomes everyone in a magical setting. Surrounded by all the summits of the island, a peaceful atmosphere resides here. You can jump from tree to tree safely and take the time to admire the views that offer different platforms.

For those who are keener of faster rides, do not hesitate to join 4WD or quad tour! They will also allow you to enter difficult access roads leading to breathtaking viewpoints and panoramas.

If you are a bit more athletic, you can also rent an electric bike that will assist you in the harder parts and enjoy a tranquil ride.

Excursions and activities in Moorea 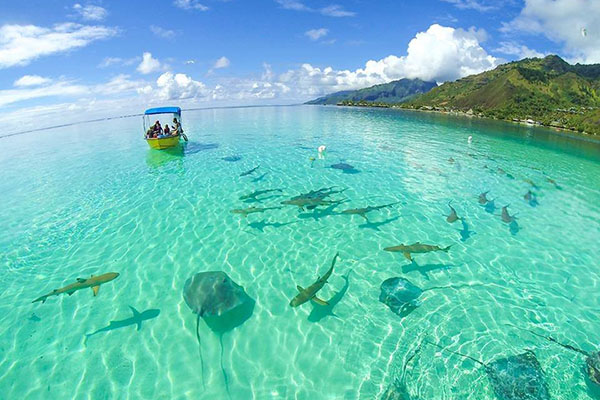 Live a colorful day in an idyllic setting, discover the gorgeous lagoon of Moorea and enjoy a typical lunch on a motu! 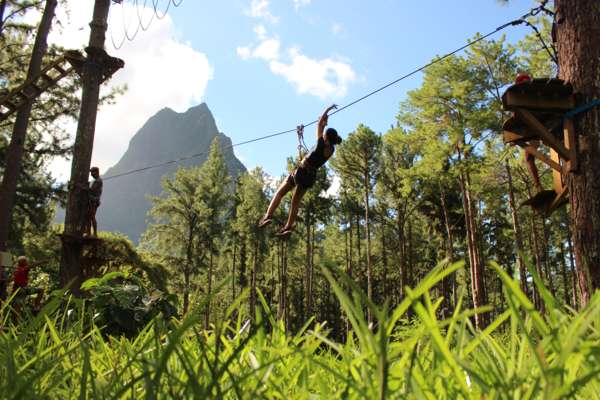 Thanks to an unlimited access to all courses, enjoy a unique and invigorating adventure, perched in the trees and surrounded by the tranquil atmosphere of the Opunohu Valley. 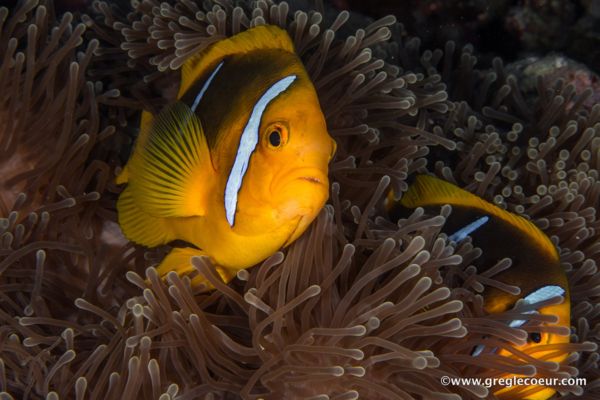 Discover the underwater world for the very time with your instructor and explore the shallow waters of the beautiful lagoon of Moorea. 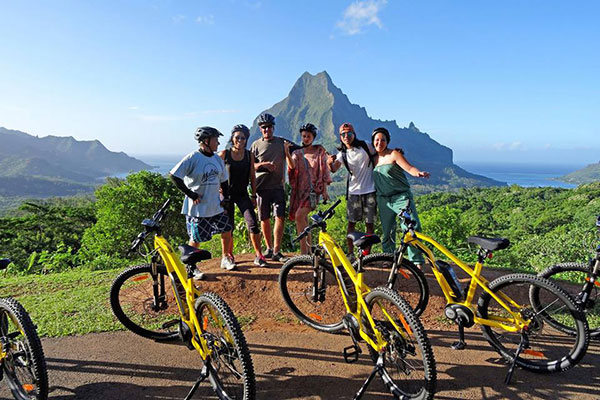 Take advantage of this tour to discover unmissable places of Moorea: The Opunohu or Cook bay, the fields of Moorea, the agriculture school, the marae, the Belvédère, the pineapple plantations and the famous panorama illustrated on the local coins of 100 francs.

Fabien will guide you to waterfalls and arcaeological sites, along ridge lines and through lush valleys...

With a marine biologist, enjoy a private tour aboard a Falcon 650 to explore the crystal clear waters of Moorea and observe its most beautiful underwater species from the boat and snorkeling. This “a la carte” tour will allow you, according to your level and desires, to make a selection of several options among the 5 activities suggested: Whale and dolphin swim, reef snorkeling, big blue discovery , sshark and ray swim, underwater flying. Some incredible discoveries are waiting for you!

The range of accommodations is very diverse. From the 5 stars hotel with overwater bungalows to the guesthouse, you are spoiled with choice.

Do not hesitate to contact us, we will guide you according to your budget and wishes and create the perfect vacation package.  Each offer has its specificities and it is always interesting to know your travelling habits in order to be able to offer you the accommodation that fits your expectations. 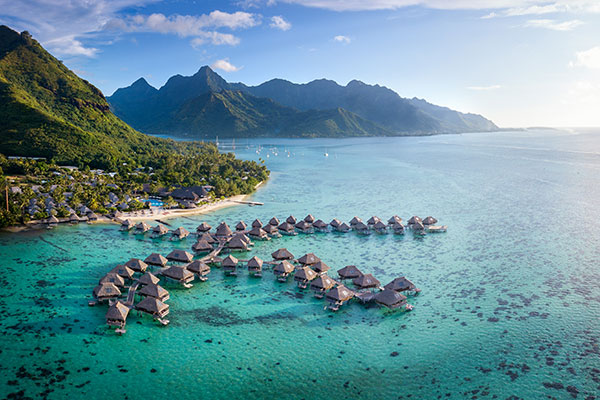 With its ideal location, the Hilton Moorea shelters a human-size paradise. 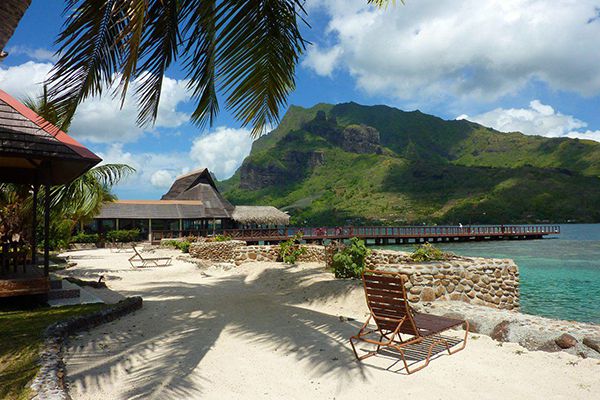 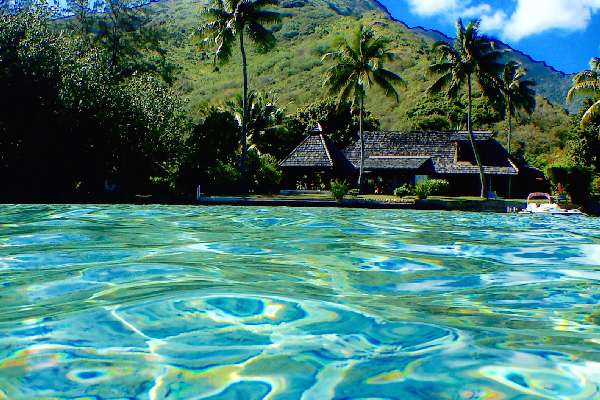 Located on the lagoon side, this beautiful property has 4 very comfortable bungalows decorated with a polynesian touch.

You will have no problem finding a place to eat. If you need a quick lunch or prefer a more gourmet dish, you will find a restaurant that will welcome you.

For a lunch with a breathtaking view, you can go to the beach restaurant of the Hotel Les Tipaniers. ‘Feet in the water’ you will be served local dishes. You can even go for a swim on the sublime beach after your dessert!

Not to miss but remember to book in advance, the Snack Mahana is a local institution. At the edge of the lagoon, the tables set in the garden, you can taste the delicious Mahi Mahi breaded with vanilla sauce. Something to stimulate your taste buds!

If you want a quick and typical lunch, go to the Lilikoi Garden Cafe. Nestled in the middle of a coconut grove, Laurence will welcome you in her garden where she cooks from her trailer some light and local dishes. A cheerful atmosphere and good mood guaranteed! Feel free to talk to her, Laurence loves the stories of travelers who come to meet her and she will give you many tips for your next adventures.

For a more chic but affordable atmosphere, the Hilton Hotel Crêperie is a place to discover in the evening. Hidden in the middle of the overwater bungalows, you can order there delicious crepes and admire under your feet the lagoon and black tips sharks swimming between the corals. An unusual and unforgettable experience!

It all depends on your stay. If you don’t want to go too far from your hotel, you can rent a bike with well-defined bike paths available. If, on the other hand, you want to go on an adventure you will need to rent a car or scooter, with the beautiful coastline and steeper terrain this is recommended.

Once you are in Tahiti, you will have two options to go to Moorea: by the sea or by the air! Fast ferries make it possible to reach the island quickly (count between 25 and 50 minutes). Air Tahiti also offers ten minutes flights from the Faa’a Airport.

As in Tahiti, the year is divided in two seasons. A hot and rainy season from November to March, and a fresh season from April to October. If we call it the fresh season, it is actually the Austral winter and it remains the best season for your holidays as the temperatures remain more pleasant and you will avoid rain, which could spoil your stay.