Depicted by Gauguin, magnified by the verb of Jacques Brel, the Marquesas Islands captivate and seduce… Located about 1,500km north of Tahiti, the archipelago attracts many globetrotters in search of escape.

There are on one hand: Nuku Hiva, Ua Pou, Ua Huka, Hatutaa, Eiao and Motu One: the northern islands. And on another hand: Hiva oa, Tahuata, Moho Tani, Fatu Hiva and Motu Nao, the southern islands.

Although they differ from other archipelagos, the Marquesas are animated by the same breath and bubbling with creativity. The Polynesian population is true to itself: generous and welcoming. Expect to be greeted by a warm “kaoha nui” at every street corner. 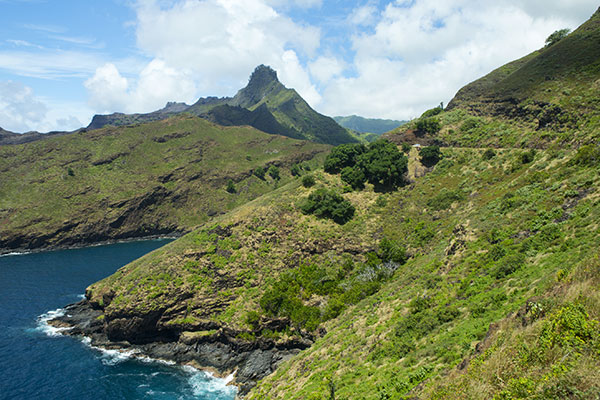 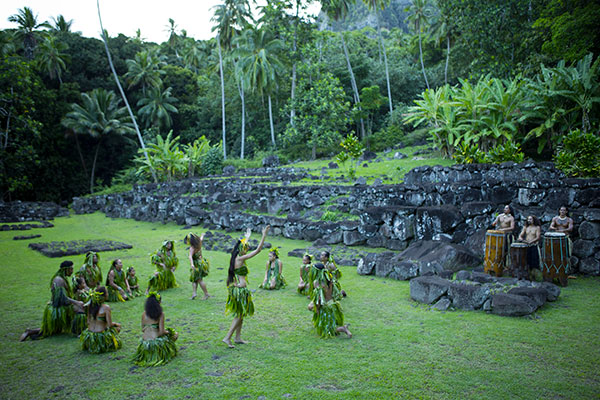 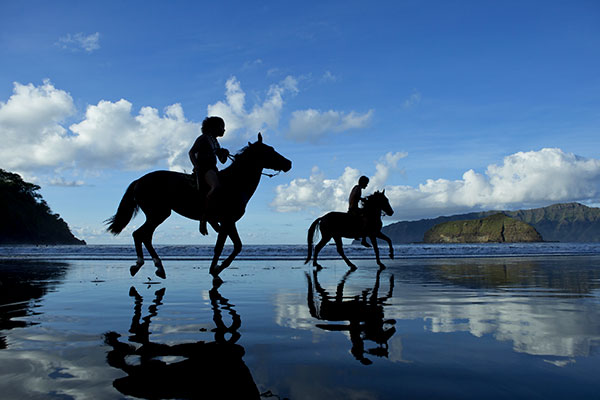 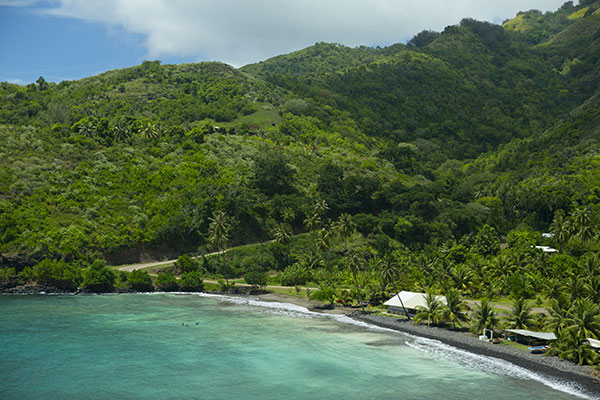 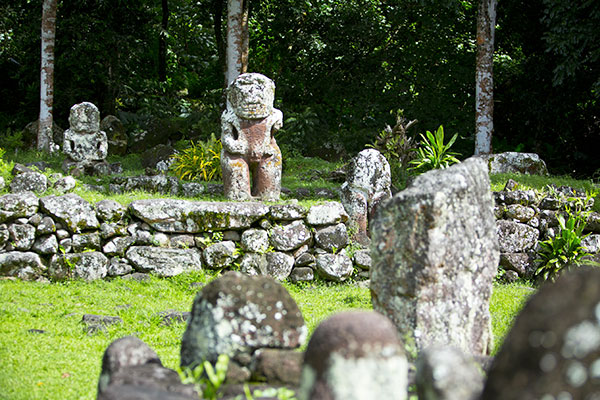 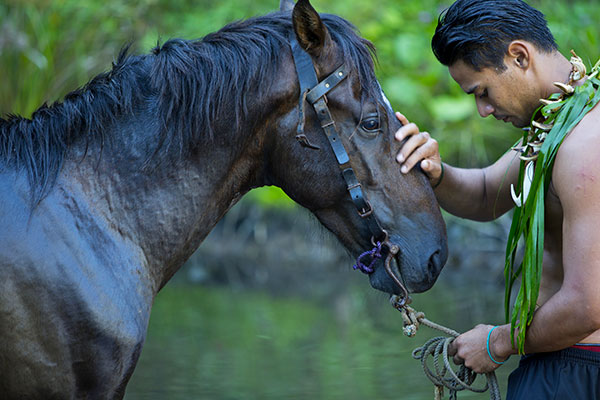 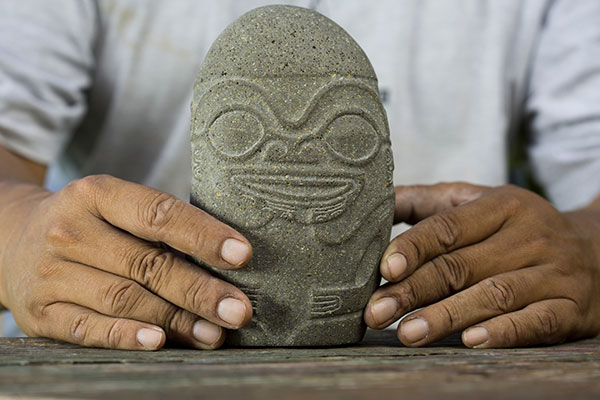 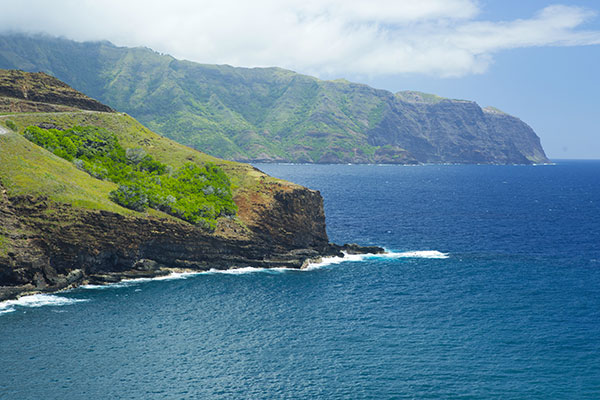 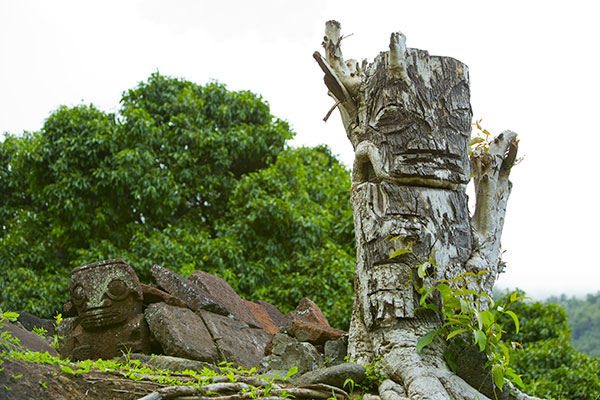 Nicknamed the “Garden of the Marquesas”, Hiva oa happens to be the second most populated island of the archipelago, after Nuku Hiva. With its 320 km² of lush mountains and steep cliffs, the island is a true haven for artists: sculptors, tattoo artists, craftsmen, singers and dancers draw their inspiration from the wild beauty of the place.

Carved in the rock, the island is drawn through the mountainous reliefs, sliced sumptuous valleys where wild horses gallop. Hiva oa is home to green hills, a lush nature that rubs a dry and arid landscape on other slopes.

If Hiva Oa remains the most known of the Marquesas Islands, it is undoubtedly because it has welcomed two famous guests: Jacques Brel and Paul Gauguin.

This crumpled land, whose pristine beauty is barely touched by the twentieth century, tells the story of the long and fascinating Marquesan history that one discovers while strolling in the middle of the vegetation.

The island of Gauguin has kept over time its mystical charm. It knew how to preserve its rhythm and this quality of life, which seduced the painter.

Our packages in Hiva Oa 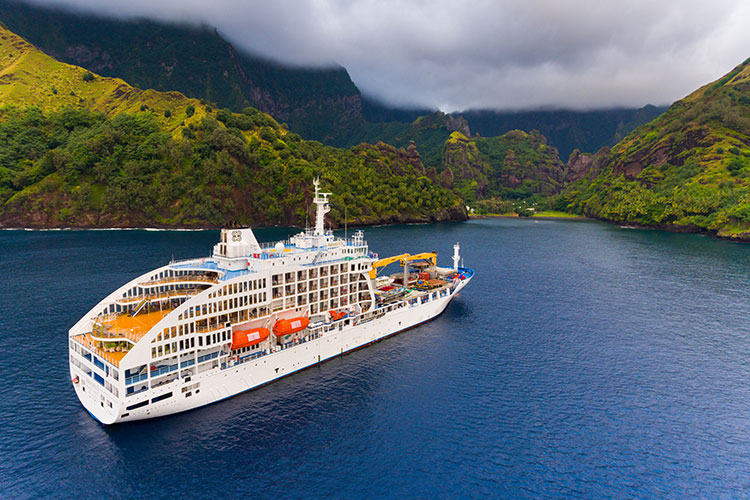 Try to unveil the mystery of the Marquesas islands and to immerge yourself into the mere Polynesian with this excpetional cruise aboard the Aranui.

Wander the streets of the capital, Atuona

Discover the charming town of Atuona, its flowered houses, its port, its lush vegetation and gain height… At the foot of Mount Temetiu, the highest peak of the island, you can contemplate the panoramic view of the bay.

“In these islands where loneliness is a must, I found a kind of peace” wrote Jacques Brel. The Belgian singer chose to leave the Parisian crowd and flee the paparazzi. Wishing to find a more relaxing lifestyle, he decided to bring his bags to Hiva Oa where he stayed with his partner. Particularly appreciated by the local population, he contributed to the development of the island and its influence. Indeed, the artist did not hesitate to make his plane available to bring back the mail or to evacuate the sick people in need of care. It is even said that he organized outdoor cinema sessions for children.

Today a site is dedicated to him, the “Espace Jacques Brel”, huge shed where his most beautiful melodies resound. In the middle thrones Jojo, the private aircraft of the singer. Many photos are xposed, stories about his life and anecdotes of everyday life…

Nicknamed “Coquin”, the French painter decided to come to the Marquesas in search of inspiration. He led a life of excess between drugs, alcohol and lust and ended his life there. The cultural center of Atuona traces the tumultuous life of the artist and exhibits some reproductions. It is also possible to visit a reconstruction of the “Maison du Jouir”.

Meet the biggest Tiki of Polynesia

It is in the bay of Puamau, at Me’ae Lipona, that were discovered the largest tikis of Polynesia. Dating from the eighteenth century, they have kept their charm of yesteryear.

Among them are Maki Taua Pepe, known as the “lying tiki”, is a surprising statue with its posture, broad smile and wide-eyed eyes. It represents a woman who gives birth, which is why it was found on its back at the origin.

The Tiki Manuiotaa, slimmer, had its head cut and then put back in place by archaeologists.

Takaii is undoubtedly the biggest tiki of Polynesia. Carved in keetu, red volcanic rock, it is around 2m67 high.

Finally, the Tiki Fau Poe is represented sitting with legs straight and apart, traditional position of women working on the ground. Legend has it that it is Takaii’s wife.

Honor the two Artists on their Graves

If they led diametrically opposed lives, Jacques Brel and Paul Gauguin chose the island for its tranquility, serenity and lifestyle. Both buried in the cemetery of Calvary at Atuona, their burials are open to the public, the opportunity to give them a last tribute.

Going to meet the smiling Tiki

In Punaei, just 10 minutes from the road, sits a strange little tiki in the middle of the forest. It radiates and exposes a broad smile that goes into its eyes. A charming encounter for anyone who ventures into the woods…

Contemplate the ‘Stone of Sacrifices’

Located at the top of a steep cliff, this stone is full of history. In ancient times it is said that virgin girls were thrown into the void as a sacrifice.

Each year, in December, the Festival of Marquesan Arts takes place. Four days of festivities involving singing, dancing and crafts. There is no better way to discover the local culture!

What activities to practice

Nature lovers will be delighted to explore the hiking trails offered by the island. Abundant waterfalls, pitons, ford passages, natural basins, there is something for everyone. Go up and down the cliffs of Caldera, stop to pick some fruits and overlook Hanapaoa Bay.

Like the other archipelagos of Polynesia, the Marquesas are full of marine attractions. The underwater biodiversity is rich and many dolphins, sharks and other manta rays come to shelter each year near the “Jardin des Marquises”.

Without any doubt, it is one of the must do activities of the Marquesas. It is usual to see wild horses, grazing green vegetation or galloping mane in the wind; some of them have been tamed and it is now possible to ride them in peace.

Take a Boat Trip to the Island of Tahuata

Embark aboard a small boat, heading Tahuata, the smallest inhabited island of the Marquesas, located just 4km south of the island. Take the opportunity to sunbath and discover the charming little village of Hapatoni. 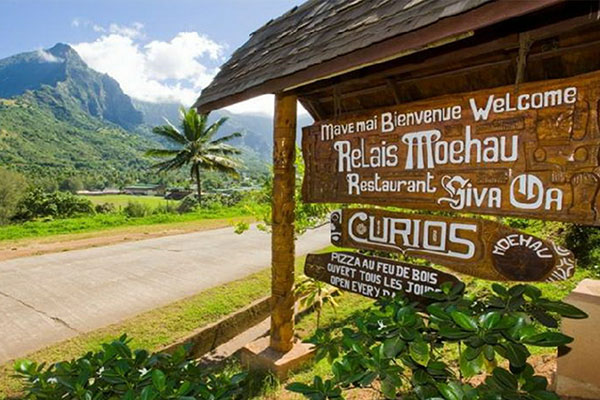 Ideal place to discover the cultural side of Hiva Oa, the Relais Moheau offers a splendid view over the bay of Atuona and Mount Temetiu. 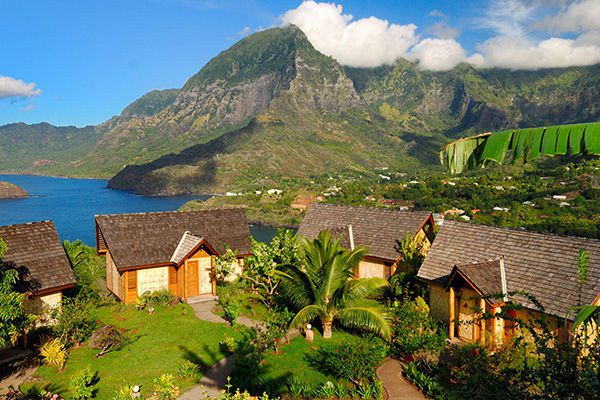 A must in Hiva Oa, this charming hotel offers you a dream panorama for an unforgettable stay. 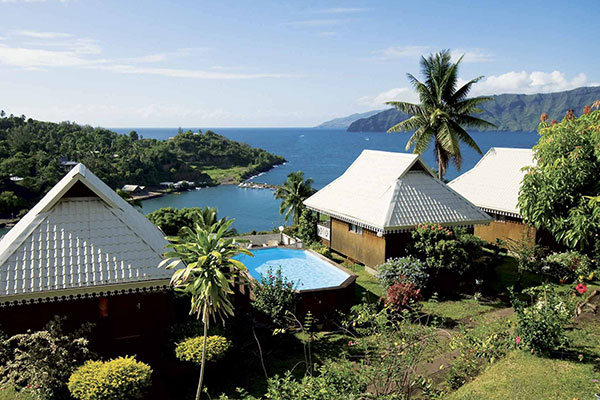 Charming little guesthouse located in Hiva Oa, the Temetiu Village is perched up a hill, offering its visitors a lovely view of Tahauku Bay..

If you stay in a guesthouse, you can probably enjoy tasty local dishes prepared by your hosts. Otherwise, you can stop in the shops of downtown Atuona, pick up some fruit by the road or go fishing…

If you stay on the island, you can book an excursion on site with your host or refer to our page. You can also ask your resort for a car rental. Finally, if you have good shoes and want to enjoy the landscape, you can walk around.

The temptation is strong to visit the other Marquesas Islands once on the archipelago. If you want to discover Nuku Hiva, you can get there easily. There is at least one rotation per day.

On the other hand, for Ua Pou, Ua Huka, Tahuata and Fatu Hiva islands, things get complicated, as you will need to check the flight schedule of the airline to organize your stay.

Although it is somewhat expensive, the plane is undeniably the fastest way to reach the Marquesas Islands. In the first place, you will have to go to the island of Tahiti. Then, simply book a Tahiti – Hiva Oa flight via the local airline Air Tahiti. The islands of Hiva oa and Nuku Hiva are serviced daily. No need to clutter with logistics, just book your flight and board with your suitcase! Check our selection of accommodation on the island

If you don’t have seasickness but have time in front of you instead, it is also possible to get there by boat. However, few providers risk to offer this type of excursion, because of its cost. Note that it takes six days from Tahiti to arrive at your destination.

Finally, perhaps you will be more comfortable aboard the Aranui 5.

Overall, the temperatures don’t vary a lot during the year. However it is different when we talk about rainfalls…
The austral summer runs from January to August. The season is hot and humid and temperatures are generally high, around 28 degrees.
The austral winter, or cool season, begins in September and ends in December. It is the ideal season to discover the Marquesas.