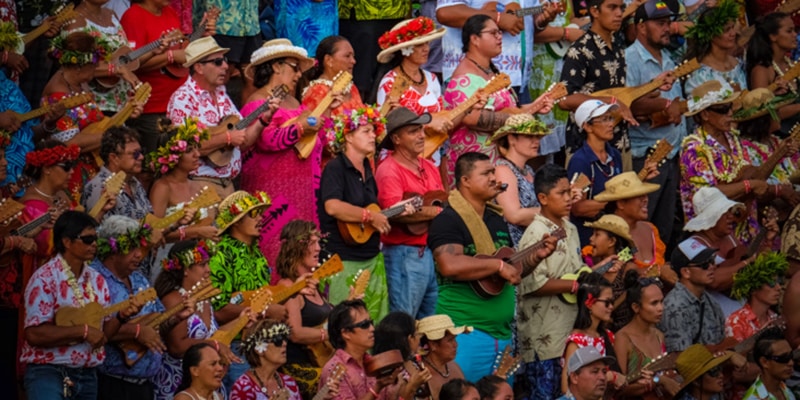 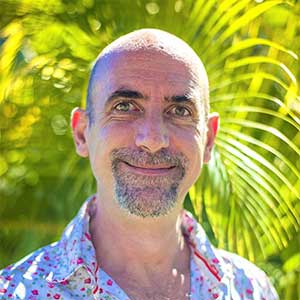 The ukulele and its world records

The ukulele is a strong symbol of the local culture. It is the most representative instrument of our islands, and its soft and melodious sounds evoke the postcard landscapes of our beautiful French Polynesia.

A few months ago, I had never played ukulele before. I must have improvised some notes in the past, but nothing very serious (or very melodious for that matter)! The event organized to beat the ukulele world record was announced a few months in advance for February 24th, and it seemed to me the perfect opportunity to take my first steps in this area! The aim of this world record: to gather as many participants as possible playing one song in unison. The goal for Tahiti was set this time at 10,000 people.

It was in the United States in 2005, in San Diego, that this adventure was launched for the first time, bringing together 125 lovers of this instrument. This was the first record validated by the Guinness Book. The english, the swedish, the japanese followed these fottsteps and finally the tahitians 2015. The island had gathered 4,792 enthusiastic participants! Unfortunately, our world record was subsequently beaten by Hong Kong, gathering 8,065 people in one place. Reaching 10,000 participants was thus a second challenge for French Polynesia. 10,000 people, it’ quite a number for our small islands scattered in the Pacific Ocean! 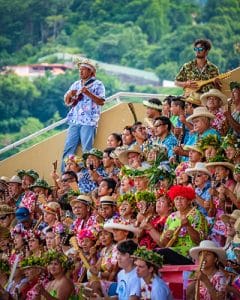 For several weeks the chosen song, Tuihei by Ms. Henrietta Alves, was broadcasted on television every night  for everyone interested to be able to train before the big day. Practice was important to be ready, especially for beginners like myself. Indeed, for the record to be validated, it is essential to play the song in unison. So for several weeks we practiced playing the notes and humming the melodious words of Tuihei. 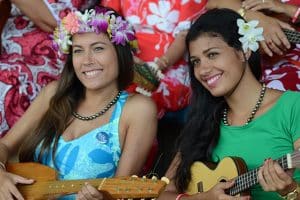 So it was on a beautiful Saturday that we all gathered in the city of Arue, in Tahiti, to participate to this second edition of the ukulele world record. It’s a colorful crowd that we found in the stadium! All participants wore shirts and dresses with flowers and Polynesian patterns for the occasion. A show in itself! There were colors everywhere and a contagious joy emanating from the crowd. Some of the participants were sitting in the stadium’s tier, the others on the lawn. Some residents of Moorea, the closest island to Tahiti, had traveled especially for the event. Some even answered the call from more distant islands: Huahine, Raiatea or Tikehau! There were even french or american travelers who joined the party! 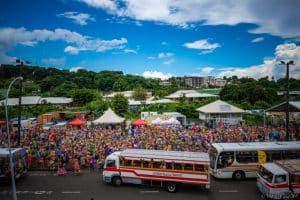 The atmosphere was great! The heat did not weaken in any way our motivation. The animations and the songs succeeded each other while other players tuned their instruments. After a few hours of preparation waiting in music for the stadium to be filled, it was finally time to show off our talents after weeks of training. We were all waiting for the starting signal and then suddenly, we were all playing our ukulele, singing in heart to the sound of thousands of instruments! The beauty of all these ukuleles and these voices together were truly worth the effort! 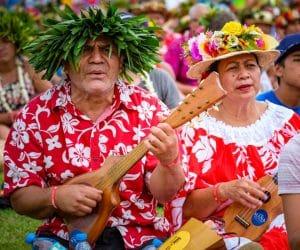 An adventure in music

This beautiful day ended like it started, beautifully, even if we did not beat the ukulele world record this time. The results were final: we were 6,302 ukulele players. More than the last time, but not enough to beat Hong Kong. Considering the 276,000 inhabitants in French Polynesia, spread over a large number of islands, we still achieved some pretty good results!

Even if the record was not reached, it was a wonderful day of sharing that made everyone happy. It was a musical celebration of the beautiful local culture and the opportunity to see polynesians speak with one voice. That day the tahitians have strengthened ties and reaffirmed their identity. We were all proud to have participated in this beautiful gathering of all generations. In summary, it was only a world record attempt, but a happy and memorable one! Next time, we will answer the call again to bring Polynesia into the story and leave with the world record! 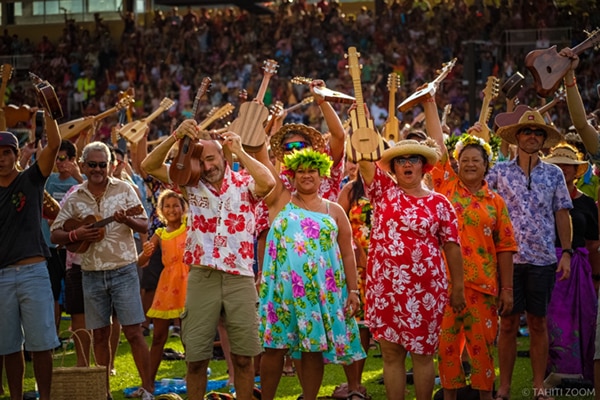