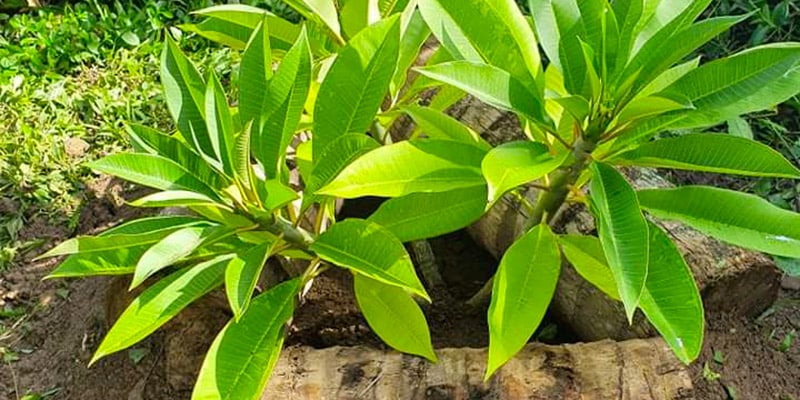 Polynesian people happen to have a very peculiar relation to land. They cultivate this bond with the ground, the source of all things. If westernization made it more tenuous, in everyone’s mind men remain connected to their homeland through an imperceptible rope. It may be tossed about but it will never break.
Though it was introduced during the urbanization, the concept of land ownership is quite blurred, we’d rather speak about rights of use and usufruct for that the land can be demarcated, bequeathed but it cannot be owned.
Here, it is the men who belong to the land, not the opposite.

This ineffable connection is to be found in the whole Polynesian triangle. In Tonga, Wallis and Futuna, for instance, the word kainga refers to both kinship and people from the same homeland.
In reo Tahiti, the substantive ‘āi’a encompasses the paternal field, the heritage, the country and therefore this source, this nurturing mother.
The mā’ohi thus talk about ta’ata tumu, stock-men, who lay claim to their land and define themselves through it. It is not the blood but rather the place of birth and living which enables someone to enter the family line.

In order to evoke this vast domestic entity, we even speak about ‘ōpū (belly/clan).
Thus, after being expelled from the womb, the child is systematically related to another belly, that of his entire family. If in most societies the placenta is perceived as a nourishing substance which unites a mother to her child, people often lose interest in it right after the birth.
In Polynesia, however, it is what establishes the bond between the newborn and his family, his land.
Bruno Saura, anthropologist, reminds us of its etymology in his 2002 article “Burying the placenta : the evolution of a rite of birth in French Polynesia“. In reo Tahiti, pūfenua means earth nucleus/center/core. It is no surprise then that so many families choose to bury it in their garden. The placenta shall return to the earth to consolidate this stock, establish the connection between a man and his origins. 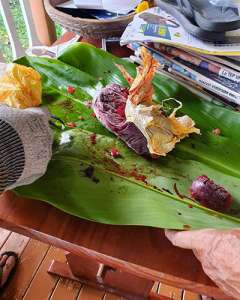 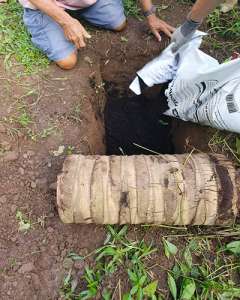 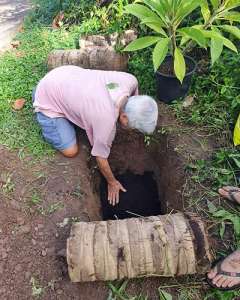 In that way, the mā’ohi beliefs are similar to the judeo-christian conception. The Polynesian myth of creation indeed mentions that Man was made of one (sand, dust, land particle). In the Bible, it is also said that « you are dust and to dust you shall return. » In both cases, man and land turn out to be indissociable.

According to Duro Raapoto, this process is in fact a means to loop the loop, to fully attribute to the land its nurturing properties in order to recognize it as a fenua metua. The woman expels the placenta and the land welcomes it to give life, in turn.

If the ceremonial aspect tends to disappear throughout the years, the tradition lives on in most families. As custom dictates, the placenta shall be buried in the yard, on the family land with a young plant so that the tree grows to the pace of the child. It testifies of the close link to nature.
Since the mother is often confined to bed, she generally does not participate to the ceremony.
The burial of the placenta is to be done by a parent or a grandparent, necessarily someone who gave life already.

In former days, it was wrapped in the pe’ue on which the baby was born. Nowadays, since less and less mothers give birth at home, we cover it with ‘autī, uru or ‘ape leaves.
As the main role of the placenta is to transmit the breath of life, it is customary to plant a fruit tree besides in order to perpetuate this transmission. Among the most popular species are to be found the coconut tree, the mango tree, the uru or even the lemon tree.
Nevertheless, by lack of knowledge regarding former customs or simply to take the easy way out, some people now choose to plant ornamental trees. This may explain why so many tiare tahiti, bougainvillea and magnolias blossom by the road.

If the rite was once used to affirm someone’s legitimacy in a land affair, nowadays it is first and foremost used by Polynesian people to be recognized ta’ata tumu, to proudly claim their affiliation to a specific island/area.

Besides, the word hotu pāinu (floating seed, drift fruit) is used to pejoratively define a person who lives far away from the place its pūfenua was buried. If he doesn’t live by the tree that carried him, the man will keep wandering like a fruit bobbing up and down in the waves. This metaphor underlines the importance of family.

Although it was initially considered impure for years, the placenta has been playing a major role in the cultural heritage and identity development of the mā’ohi.