Better known as “Scad”, the “Ature“ is a famous little pelagic fish from Polynesia . It stands out from the crowd with its silver glimmer, its conspicuous fishbones and its notched caudal fin.

In Polynesia, the “Ature” only comes once a year, generally at the very beginning (from january to march) before heading back offshore where it will grow.

Usually, the “Ature” season only lasts a few days that are not to be missed, especially as most experienced fishermen do not wait to be invited to the show, which brings together schools of thousands of fish.

The collection of this traditional fishing is intended for the internal market only, as it represents a source of local self-consumption.

In French Polynesia, the fish is given a different name according to its stage of evolution : “Ature” becomes “Aramea” and turns into “Orare” afterwards.

Fried, raw, dipped in lemon juice or coconut milk, the “Ature” is very popular in Polynesia.

“Ature” fishing is a seasonal activity in French Polynesia, which is usually done with a big net and requires a great workforce. It takes experience, dexterity and quite a few technical skills to catch this fish.

Every year, the arrival of ten thousands fish gathered in schools is subject to what we call a “miraculous fishing”. 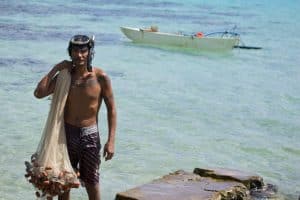 Fishermen stare at schools of  “Ature” from the beach, identify where they are thanks to their shadows or potential predators which prowl around and intend to attack the schools from time to time.

After having identified the ideal place where to put the temporary fish park, fishermen leave very early in the morning and place their net where it will stay the whole day. The next morning, at dawn, they get back to the fish park to collect the fish: thousands of usually caught in the net.

In ancient history, “Ature” fishing was not perceived the same way… It was seen as a source of food exclusively: no catch was sold, evrything was distributed among the families of the village. A period of “rahui” as established, when fishing was forbidden in order to give time to the fish to grow and reproduce and to avoid overfishing.  The idea was to deprive oneself for a time so as to gather the D-day and get to fish all together, as a village.

Nowadays, several fishermen are exclusively attracted by money, traditions are no longer prevailing.

Fortunately, some people, like Rurutu’s inhabitants, in the Austral archipelago, strive to perpetuate traditions and live by the “Rahui”.

Every year, they deprive themselves from “Ature” in order to have enough fish to feed the entire village during the season. They went even further by banning individual and commercial fishing. 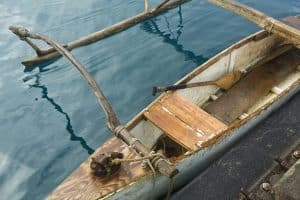 Even though the”Ature” fishing evolved, it remains important to Polynesians, as it plays a leading role in the social cohesion of the island and it may attract people and arouse vocation among the younger generation.

“Ature” fishing is essential to our islands, it mobilizes the whole village and happens to provide food, generate income and it brings people together.