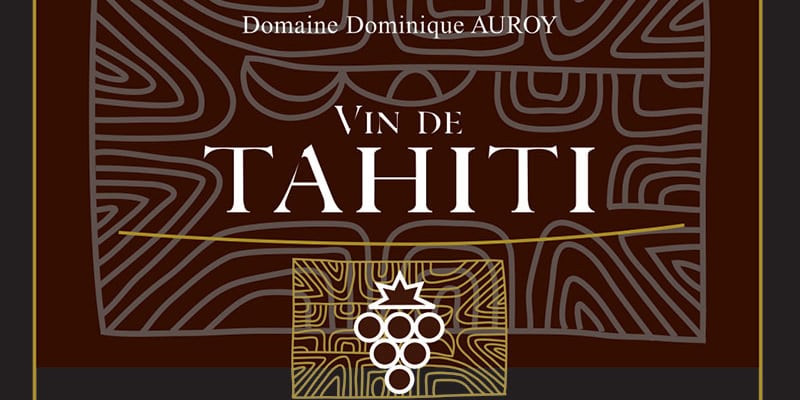 The Grapes of the Ocean : The Tahitian coral Wine

Rangiroa, a tiny isolated island of the very end of the world. Located 1h flight away from Tahiti, this 260km in circumference atoll is part of the 118 pearls which compose the French Polynesia necklace. Endless white-sand beaches, a translucent lagoon, a submarine wildlife which even the Great Barrier Reef envies and there, just between coconut trees, a few vine plants nothing seems to disturb.

In the beginning, an extravagant idea: growing grapevines where no one tried to, in the middle of the Pacific ocean. In love with oenology, Dominique Auroy sets for himself the challenge of reinventing vines in the tropics, of emphasizing the aroma with hard work and instilling passion in his bottles. A real concentrate of impetuosity spiced up with a hint of “provocation” as he likes to say.

Nowadays, the property stretches over 15 acres. Sheltered from the blazing sun, under the coconut trees, the grapevines thrive 330 ft away from the lagoon, from where you can hear the sound of the waves. Protected from the sea spray thanks to the papaya trees and tiare Tahiti surrounding them, the vines grow in the middle of coral crumbs, on a soil fertilized by coconut tree residues. There, 13 670 mi away from France, in what seems to be a hostile environment for viticulture, a miracle happens. Thanks to the seeds and crushed vine shoots, the coral soil turns out to be productive.

Thus, the whole difficulty of this undertaking results from both soil composition and geographical position of the vineyard. Located on an islet of the Tuamotu archipelago, a few minutes from the Avatoru village, it is necessary to use a boat shuttle departing from the main village, if one wants to go there everyday.

In order to alleviate the lack of water, some wells were dug down the phreatic table to water the vines three times a day. Eventually, the quality of sunlight also plays a leading role in the vegetative cycle as it determines the maturation of grapes. Temperatures rarely go below 72°F and it does not rain that often. However, unlike France which enjoys 12h of sunshine a day during summertime, days are much shorter in Rangiroa, which is why it took quite a few months to adapt to the Polynesian conditions.

Although cycles vary according to weather conditions and tides, the harvest takes place every five months in average.
Now the property products three different types of white wines: the “Blanc de Corail”, the “Clos du Récif” and the “Blanc moelleux”, as well as a “Rosé Nacarat”. 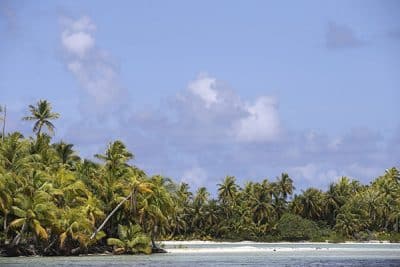 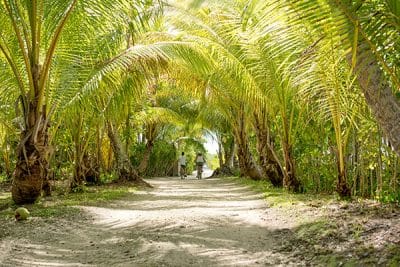 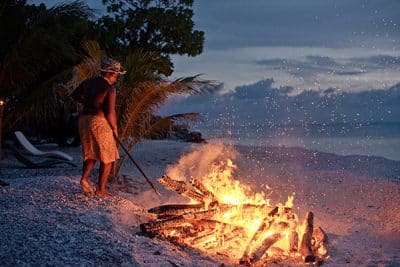 Before encountering success, Dominique Auroy strove to find the appropriate place for his vineyard. Thus, he tried to plant his vines through the five archipelagos from 1992 to 1994. Suffering from heat, humidity, climatic variations and governmental decisions, the first imported vine stocks ultimately wilted. Unexpectedly, those growing up in the most arid archipelago throve.

With a wealth of experience behind him, the businessman undertook to plant seven acres of vine in 1997. Two years later came the first harvests and in 2002, he was joined by Sébastien Thépénier, a Burgundian oenologist.
In 2003, the vineyard products 400 bottles per harvest, two times a year.
In 2009, the 2007 vintage “Vin de Tahiti Blanc de Corail” wins the silver medal during the 15th edition of the international “Vinalies” in Paris.
In 2010, the vineyard considerably expands, it now stretches over 15 acres and the annual production goes up to 30 000 bottles.

Towards an organic viticulture

During the whole process, Dominique Auroy and his team endeavored to observe and adapt to the environment, in order to preserve the ecosystem.
Nowadays, the company is willing to develop organic alternatives. Besides, in 2015, the investment was devoted to grinding equipment in order to do so.

Growing grapes in the Tuamotu islands

If the geographical position of the vineyard brings a smile to your face, the reality on the ground is surprising as well.
Early in the morning, the members of the team jump in the boat shuttle. After a couple of minutes over the lagoon, they put on their most gorgeous hat – made out of pandanus leaves – and start working. It takes a lot of energy to weed the plants, cut branches and protect the grapes from the sun. Thus, workers often shelter under a papaya tree to drink fresh coconut juice, something you may not see in France…
Choosing Polynesia as a playground also implies to face unusual situations, just like the arrival of hundreds of crabs during full moon.

A golden color in the middle of translucent waters

Grown, harvested and made into wine at the vineyard, the “Blanc de Corail” perfectly fits the Tuamotu spirit: impetuous, fresh and slightly acidulous. It is delightful with fish and sea fruits and guess what? You can find plenty out there… Surprising citrus fruits and green mango aromas and its coral minerality make it the ideal wine to taste by the lagoon, under the coconut trees. But, wherever you are, it will bring you to Rangiroa at first sip.