The pareo: Its myth, history and representations

Dressed up with a pareo… and a smile. This is how Paul Gauguin painted the Polynesian women whose path he met. Captured by his brush, they wear vivid colors, expose their artless beauty with casualness. Spontaneous, natural and graceful, the vahine enjoy to drape in a strip of cloth.

Unadorned, the pāreu embodies on its own the island indolence, this natural, almost innate, charm of the vahine. It is associated to authenticity, languor and freshness.

Everyone needs to have a few in their wardrobe. It is only equalled by the little black dress. We collect dozens of it, we borrow it, we lose it…

Simple, floating, flimsy, the pāreu grazes the body, it covers, hides or instead reveals the skin. It is the only thing you need to practice ‘ori Tahiti. It follows the swing of your hips and emphasizes the movement. It definitely enhances a nice fa’arapu. We roll it, we shake it, we wet it, we wring it out, we spare it nothing of the trials and tribulations of life. 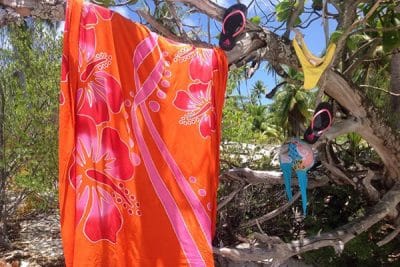 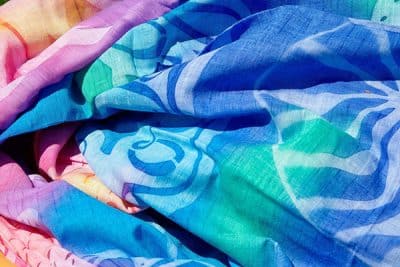 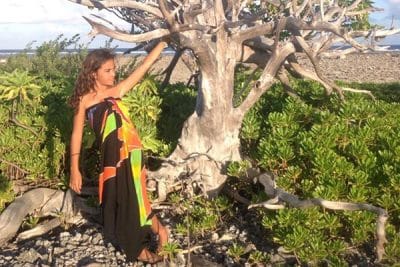 We wrap ourselves with this island sweetness as we get out of the shower, to stroll under le coconut trees or lay down on the beach. The pareo is ageless. An improvised bun, a quickly tied pāreu, an aute behind the ear and flip flops on her feet. More than just a style, it is the expression of a lifestyle. From the lonely vahine on the beach to the māmā sweeping her garden with a nī’au broom, it is indissociable from the conception we have of the island life. It is firmly rooted in our customs and dwells in the collective imagination.

Its gleaming colors and exotic patterns retranscribe this joie de vivre, this typically Polynesian warm which is to be found within the hearts and over the bodies. In order to decorate a wall way too white, cover ones eiderdowns or give a local touch to car seats, it turns out to be really handy!
Hanging by the road, floating with the wind, it guides passers-by to the place of the party.
As for the shrimp lovers, they like to surge into a bed of stream up to the calf with a pareo knotted at the waist, used as a landing net.

It also occupies a starring role during the Polynesian traditional wedding ceremony and more specifically that of the ‘umuai in Rurutu where members of the family and inhabitants of the surrounding villages are invited to participate to a procession in which they follow the newly weds and surround them with a dozen-meter long pareo.

The origins of the pareo:

The tropical climate of Polynesia and its daily insolation made it hard to wear heavy clothes. Now the islands lacked the raw materials necessary to the making of fabrics, there were no wool, no silk, no hemp. It quickly became essential to find an alternative. Thus, the pareo derives from the tapa, a plant material made out of bark. The tupuna used to tie a large strip of nonwoven fabric around their waist. Called ka’ in the Marquesas archipelago, the latter is known as pāreu in the Society islands.

Generally made out of the aute (the paper mulberry) or of the ‘ōrā (the banyan) – considered as a sacred tree here in Polynesia – the tapa happens to be quite rough and requires a remarkable dexterity as well as a considerable amount of time.
Even though it is rigid and somewhat rudimentary, the tapa remains an ornamental item of clothing. Painted with earth and plant pigments, it displays handmade geometrical patterns.
The arrival of whalers and missionaries at the end of the 18th century and the development of the international trade introduced weaving in Polynesia.
Quickly, the tapa was supplanted by the cotton, which turned out to be more convenient for everyday life.

The pareo nowadays around the world

Who would have thought that a tiny piece of barkcloth would travel the world? Painted by Paul Gauguin, described by Pierre Loti and the explorers, the pareo became famous through the prism of the traveler. Thus, the first models were exported to the European continent in the 1930s and quickly encountered a tremendous success.

In cotton, linen or lycra, the pareo remains fluid and perfect for summer. As you get out of the pool, head to a cocktail party or take a nap in a hammock, it is an invitation, an ode to vacation.

As for Polynesia, the promotional development of the region, the diversification of the aerial offer and the word of mouth contributed to considerably increase touristic affluence. In order to satisfy an audience eager for discoveries and novelties, the service providers tried different types of excursions. The activities linked to nature and culture became really popular and this is why the pareo show progressively found its place among the various animations.
Nowadays, every guide will offer you the traditional coconut opening followed by a quick explanation of the different techniques you can use to tie a pareo, it became an attraction. 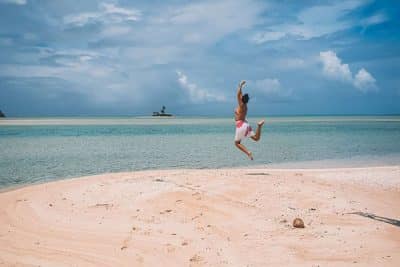 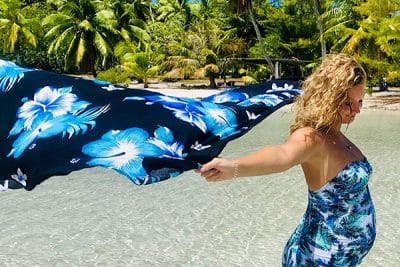 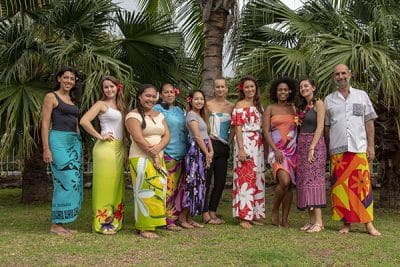 The pāreu is a symbol, the expression of a culture, a history, a way of life. You cannot cheat with the pāreu : no seam, no clip, no pin, it’s just you and your ingenuity.

Thus, every year, Tahiti Tourisme invites the whole population to value tradition, celebrate its customs and live its culture by participating to the pāreu day. Whether they go to work, to school or just wander in town, the Polynesians are enjoined to wear a pareo, just like in former times.

The idea is to go back to the roots, to the simplicity of the old days and the old-fashioned charm.